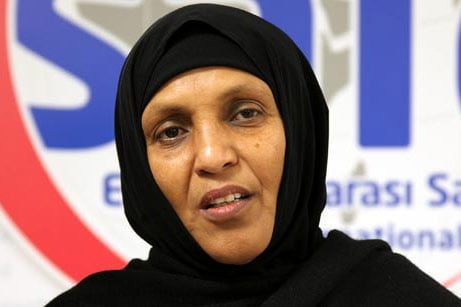 Turkish civil society organizations active in Somalia show marked differences with their Western counterparts, as the former donate directly to Somalia rather than through international bodies and have a presence in the country for no other purpose than helping “their brothers and sisters in Somalia,” the country’s minister for human development and public services, Maryan Qasim, has said.

Qasim, who was in Turkey in late December as part of an official visit, told Today’s Zaman during her İstanbul visit that other countries have a practice of donating to the country through the UN, unlike Turkish organizations, which come to Somalia and work directly with the locals opening wells, handing out supplies and building schools. She said this minimized the risk of corruption and bribery, ensuring that the donations get to their intended receivers.

During her visit to Ankara, Qasim met with Health Minister Recep Akdağ, Family and Social Policy Minister Fatma Şahin and Deputy Prime Minister Bekir Bozdağ. Her talks centered mostly on cooperation in the fields of education and health. She also visited the headquarters of several civil society groups active in Somalia.

Speaking about the differences between Turkish donors and others, she said, “Donor countries like United Kingdom, Sweden, Norway and Saudi Arabia pay millions of dollars to help Somalia — which we are grateful for. But there is nothing like direct implementation,” she said, adding that only a tiny portion of the donations ever make it to those who need it, illustrating why Somalia appreciated direct aid and prefer donors distribute supplies and money without any intermediaries. “Turkish NGOs implement directly in Somalia. They build schools, give charity to people and distribute money directly without intermediaries. That’s why the Somali people like them. The second and the most important aspect of Turkey’s contributions is that they have no hidden agenda in helping their brothers and sisters,” the minister added.

The minister confirmed that relations between Turkey and Somalia have been developing rapidly over the past year. “We have very many Turkish NGOs present in Somalia,” she said. “The ones I met with include Yardımeli, Kimse Yok Mu and many others. They are doing a good job in Somalia and are building roads and hospitals. Here in Turkey there are Somali students, some attending universities, some at secondary schools and some post-graduates. They number just under 2,000.”

She also noted that a Turkish school will soon be active in Somalia. “It is really nice with smart boards, laboratories and a very good secondary school. Children in Somalia like Turks more than anyone else. Also, the Turkish Religious Affairs Directorate finished building a school and they want to open it soon. They asked me to attend the opening ceremony and open the school for them when I go back to Somalia. It will start with 120 students — 80 boys and 40 girls — and every year these numbers will increase. Things are getting better in Somalia,” she said.

Qasim also called on Turkish entrepreneurs to invest in Somalia. “The opportunities are so big because Somalia is rich in resources and natural resources. We have the longest coast in Africa, the richest coast in Africa. The whole world is currently talking about Somali pirates, but it is not all about pirates.”

She said Somalia needed businesses to invest in the construction of new hotels and other facilities as well as infrastructure, and called on Turkish construction companies to invest in the country. Acknowledging that the main concern over investing in Somalia remains the civil war, she said: “I cannot say that everything has settled down, but it is more peaceful than it was two years ago. Yes, if there is no security and stability, you cannot talk about economic development. We have to achieve these; that is true. But things are getting better,” she said.

The minister said that because of the international arms embargo against Somalia, the government was finding it hard to build a strong army and thus had to rely on troops from other countries. “I think we can say that Somalia will be safe and secure when we are able to build our own national army. The Turkish government will also be assisting Somalia in the area of defense,” she said. “We hope that Turkey will help us to stabilize our country,” Qasim added.

Qasim visited Turkey in late December. During her visit, in addition to meeting with ministers, she attended a certification ceremony held by the Aegean International Health Federation (ESAFED) for Somali health professionals who were trained in Turkey. “Those health professionals were not only trained individually but they will also train others when they go back to Somalia.”

She said her meetings with Şahin and Akdağ as well as Bozdağ have been very fruitful. A bilateral agreement between the health ministries of both countries will be signed, she said, noting that Turkey will send a group of Turkish doctors and medical equipment to Somalia. “And as for the people who cannot be treated in Somalia, they will bring them to Turkey.”

The Archbishop of Abuja made the statement during a Friendship and Dialogue Dinner, organised by UFUK Dialogue in Abuja recently. He said, “God has put us all in this one boat called Nigeria. And we really have no other option than to try to live together in peace with all our differences.

GAMZE GÜL, İSTANBUL Economy Minister Zafer Çağlayan said on Wednesday at a forum organized by TUSKON that the government is gearing up to increase the mutual trade volume with Ghana from $550 million in 2012 to $1 billion in the next two years. Speaking to participants at the Turkey-Ghana Trade and Investment Forum organized by […]