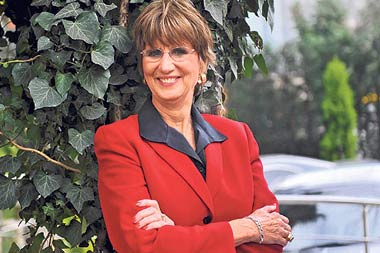 American sociology professor Helen Rose Ebaugh is the author of a book on the Gülen movement, “The Gülen Movement: A Sociological Analysis of a Civic Movement Rooted in Moderate Islam.”

“I do not think there are people in Houston who are afraid of this movement. Rather I think that a lot of people are realizing that the emphasis on education and interfaith dialogue is exactly what we need to hear from the Muslim world.

American sociology professor Helen Rose Ebaugh, who is also the author of a book analyzing the Gülen movement, said the movement is a powerful challenge to the fears that people have after the 9/11 attacks and also praised the movement for its tremendous contribution to world peace.

The professor visited İstanbul last week upon an invitation from the Journalists and Writers Foundation (GYV) and shared her opinion with Sunday’s Zaman. Ebaugh is known for her book titled “The Gülen Movement: A Sociological Analysis of a Civic Movement Rooted in Moderate Islam.”

“I do not think there are people in Houston who are afraid of this movement. Rather I think that a lot of people are realizing that the emphasis on education and interfaith dialogue [by the Gülen movement] is exactly what we need to hear from the Muslim world.

So I see it as a powerful challenge to the fears that people have after 9/11,” by which Ebaugh was referring to the growing trend of Islamophobia in the Western world.

For the professor, the best way to overcome any kind of prejudice is one on one, getting to know people who challenge your stereotypes. “As long as the [Gülen] movement stays clean and there is not any terrorism or violence in it, people will continue to call it ‘peace loving’ on the whole,” she added.

Ebaugh also said the movement was contributing to world peace tremendously. She praised the launch of Abant platforms that bring together people from different positions for dialogue. She believes these efforts help to make a more peaceful world for all nations.

In response to a question about Gülen’s critics, the professor said she takes the criticisms quite seriously, but critics fail to provide data about their concerns.

“In a way I can understand their concerns. Nobody wants an Islamic state like Iran. People want women to have freedom within a movement. Nobody wants secret societies lurking around, so their concerns are legitimate. It’s just that I don’t see any data and nothing from my interviews connects those concerns with what I see in the movement. And I say to these critics over and over again: ‘Please give me data. I’m a scientist — show me where your fears come from,’ but nobody produces data to show that it is more than just fear. It is ideology.”

Ebaugh is surprised most by “the fear that the movement is trying to infiltrate the military and the government in order to plan a takeover.” She said: “Some of these critics were convinced that that’s about to happen. I was surprised to see how sure they were of this, but they said to me, ‘Everybody knows this.’ I said: ‘I don’t know it. I need some names. I need some data,’ but that could never be produced. I was surprised how adamant people were in their convictions that this is what was happening. The other thing that surprised me was that over 50 percent of these critics had never met anybody in the movement, but they were part of a group that thought the same way; also many of them read Cumhuriyet [newspaper] and were getting a lot of their sources there. I was amazed at how few of them had first hand experience with people in the movement.”

What attracted the professor to the Gülen movement was the protest raised by Fethullah Gülen in the wake of the 9/11 attacks.

“After 9/11 I was looking for Muslims who would speak up and challenge the terrorism. And 11 days after the attack, Mr. Gülen protested the attack,” she said.

For her, there are civil movements similar to the Gülen movement in other parts of the world, but what distinguishes the Gülen movement from others is that it is a “decentralized” movement. “This is very important. Because rather than going from top to down, it goes from down to top. And this gives dynamism and commitment to the movement.”

In response to a question on the financial transparency of the Gülen movement, Ebaugh said: “The chief administrators of these institutions were very open about the initial money, where their current operating budget comes from. They opened up their books to me. I found a lot of transparency,” she said.

The professor started her research on the Gülen movement on its financial resources, and she interviewed people from the movement from the richest to the poorest.

She noted that everyone being suspicious about what was behind the scenes was mainly because the movement was acting in many areas of life. In her experience people have been very forthright about their financial transactions. She said she found no reason to suspect any other financial action “on the side.”

Asked whether she was satisfied about the answers she got regarding the funding of the movement, Ebaugh said: “I felt I had answered my basic question. When you realize that most people are giving an average 10 percent and multiply that by millions in the world, you get big figures. Plus, many of these projects become self-supporting, such as the schools.”

Ebaugh said she believed the main reason for the worldwide respect for the Gülen movement — such as some countries allocating land for Gülen schools — was the movement’s “good works” and “good hearts.” She said: “Everybody wants to educate young people. I mean that’s the start of a basic human value, so here are these people coming and emphasizing basic human values, tolerance and interfaith dialogue. And this isn’t just wishes floating in the sky. The volunteers in the movement are effective, they get results.”

What impresses the professor about volunteers in the movement who travel to other parts of the world to educate people is their “dedication.” She said the “education volunteers” are very dedicated to the beliefs and values of the movement, and they are willing to give of themselves to have the movement attain its objectives.

Ebaugh also shared her opinions about the class structure of the followers of the movement. She said: “I think it’s appealing to all ranks of society in different ways. With Kimse Yok Mu [Is Anybody There], it’s addressing people in dire need, in disasters, in whatever. Many of the schools are in minority areas, but they are also attracting middle class and wealthier children who can afford the tuition, and then a lot of the luncheons and dialogue activities are drawing politicians, businessmen and leaders in the community. So I think it is addressing all different levels, maybe in different ways, but there is something for everybody.”

In her book, Ebaugh tells of her experiences talking to people who donate to the movement. During the interview, she shared a similar story. “I was touched by these workers. For example, one of the workers said he was laid off from his job and had no income so for several months he couldn’t give anything to the movement; however, he went and volunteered in one of the schools while he was looking for a job because he felt that that if he couldn’t give his money he could give his time.”

“For many of them it is a burden, but they still do it,” she said.

She also underlined that she did not meet Fethullah Gülen and does not want to because she is more interested in how his words and opinions impact people’s lives.

“I am basically a social scientist. And I am very committed to the use of the scientific method to study a phenomenon. So I was afraid that if I met Mr. Gülen, my readers would say I was saying what he wants me to say. I needed to keep a distance. I wanted to be objective as an outsider. I could give a better analysis in this way.”