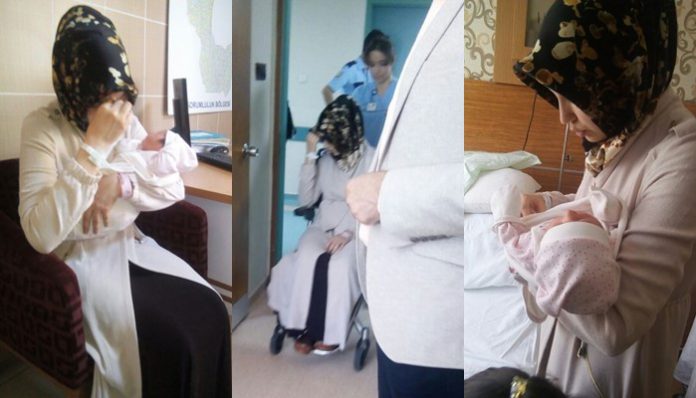 A Turkish women, Nazlı N. Mert, who has just given birth to a baby at private Lokman Hekim Hospital in Ankara’s Etlik neighborhood, was detained by police teams and transferred to police station with her newly-born baby on Saturday as part of post-coup witch hunt campaign targeting alleged members of the Gülen movement.

It was reported that the husband of Nazlı N. Mert, who gave birth to a baby in an elective caesarean procedure in the hospital, has been previously arrested and imprisoned over his alleged ties with the Gülen movement.

Turkey’s main opposition the Republican People Party (CHP) deputy Sezgin Tanrıkulu said he has been  informed that Nazlı N. Mert was released by police late on Saturday in a message he shared in his Twitter account.

This is not Turkish police’s first detention of women who just gave a birth in Turkey. Under the strict directives of the Turkish government ruled by autocratic President Recep Tayyip Erdoğan, Turkish police has also detained Elif Aslaner, a religious education teacher, who gave birth to a baby on Wednesday at a private hospital in Bursa, due to her alleged links to the faith-based Gülen movement on Friday morning.

According to a statement from her husband who spoke to the Aktifhaber news portal, police teams arrived at the hospital on Wednesday evening to detain Aslaner; however, the woman’s doctor said she should be kept under supervision for at least 48 hours because of possible complications.

Aslaner’s husband said his wife had preeclampsia and suffered from convulsions when she gave birth to her first baby and remained in coma for two days. The husband said there was the risk of the same complications to recur again.

The husband also said their house was raided and searched by the police at a time when they were not at home while his wife was still pregnant. He said his wife did not want to surrender to the police because she was afraid of being arrested just like some other women who were arrested while they were pregnant or shortly after giving birth.

According to Aktifhaber, Aslaner was detained on Friday morning just as she was being discharged from hospital with her newborn baby.

In May, Aysun Aydemir, an English teacher who gave birth to a baby in an elective caesarean procedure, was detained at the hospital and subsequently arrested by a court and put in pretrial detention with a 3-day-old baby in Zonguldak province as part of a witch-hunt targeting the Gülen movement.

In late January, Fadime Günay, who gave birth to a baby, was detained by police in Antalya’s Alanya Başkent Hospital as part of the witch-hunt targeting the Gülen movement.
In early January, Ş.A., a former private school teacher and mother of a week-old premature infant, was taken into police custody over links to the Gülen movement while she was on her way to the hospital to feed the baby.

A day after Ş.A. was taken into police custody, another mother known as Meryem gave birth to twins by C-section in a hospital in Konya and was detained by police despite hospital reports that she should not travel and was taken to Aksaray from Konya in a police car.

More than 17,000 women in Turkey, many with small children, have been jailed in an unprecedented crackdown and subjected to torture and ill-treatment in detention centers and prisons as part of the government’s systematic campaign of intimidation and persecution of critics and opponents, a new report titled “Jailing Women In Turkey: Systematic Campaign of Persecution and Fear” released in April by the Stockholm Center for Freedom (SCF) has revealed.

Turkey survived a military coup attempt on July 15 that killed over 240 people. Immediately after the putsch, the Justice and Development Party (AKP) government along with Turkey’s autocratic President Recep Tayyip Erdoğan pinned the blame on the Gülen movement.

Many, though not all, of the officials are suspected of having links to the Gulen movement accused of plotting the 15 July coup attempt last year. Given the lack of evidence, it seems unlikely that the Turks would be able to provide better evidence to the Germans that these lower-level figures committed any crimes.