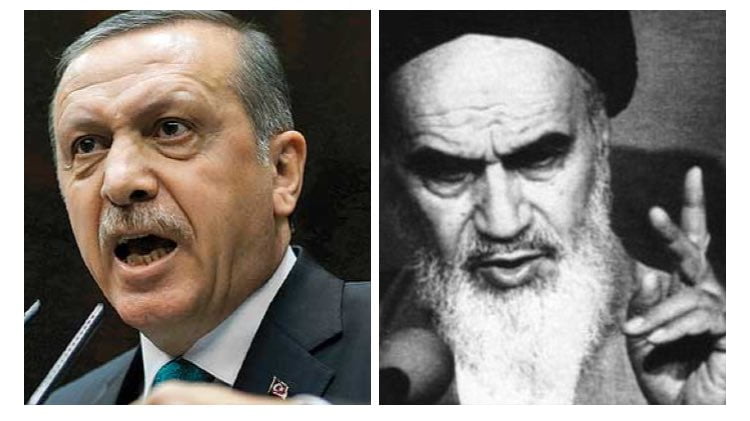 The Turkish president’s post-coup crackdowns are following in the footsteps of Iran’s Islamic revolution.

There are many differences, but also striking similarities, between the current state of affairs in Turkey and the 1979 revolution in Iran that established the Islamic Republic. Iran’s pre-revolutionary political scene, like Turkey’s today, was relatively dynamic and made up of competing parties and factions from across the political spectrum, from Marxist groups to secular nationalist parties. True, Shah Mohammad Reza Pahlavi reigned supreme, but millions of Iranians who marched in the streets against him were animated by a variety of interests and ideologies.

The theocracy that replaced him managed to crush all that stood in its way. Although Iran’s revolution was not entirely Islamist in nature, it was effectively captured by Islamist forces under the direction of a strong, self-assured, and charismatic leader, Ayatollah Ruhollah Khomeini.

Khomeini’s Islamist faction viewed secularism and nationalism as forces of “Westoxification” that had infected Muslim Iran, which motivated its post-revolutionary mass arrests, executions, and purging of state institutions. The military was a prime target for these Islamists. The nascent Islamic Republic executed thousands of military officers loyal to the shah, neutering the Artesh, or conventional military, as an effective fighting force. The Islamic Revolutionary Guard Corps (IRGC) and the paramilitary Basij were created not only to fight the war with Iraq, which the Artesh could no longer conduct effectively, but to guard the Islamic Republic from internal challenges, especially potential military coups.

Erdogan has likewise used the coup — which he has described as a gift from “God” — as an opportunity to dismantle Turkey’s secular state and to imprison thousands of opponents. They include a wide swath of the civil service; indeed, it’s now clear that the Erdogan government had prepared, prior to the coup, a list of his suspected opponents throughout the government. But, as in Iran, the Turkish military has been at the center of his purging campaign. The purges are not the only reason the Turkish military now seems to have been neutered as a bulwark against the country’s Islamization. The popular opposition to the coup, which Erdogan has since rallied for his own benefit, has made it impossible for the military to resist the president’s grab for absolute power.

It’s also worth considering how the Iranian revolution led to the elimination of all the country’s opposition parties. Ayatollah Khomeini had claimed a role as a figurehead in the early years of the revolution but exploited public frustration with the shah and Iranian grievances against the United States and the West in order to assume great power; he created the position of supreme leader for himself, guaranteeing his role as Iran’s undisputed religious, political, and military leader. His successor, Supreme Leader Ayatollah Ali Khamenei, likes to see Iran’s political system less like an Islamic republic and more like an Islamic government following the laws of God as interpreted by him and his followers — and not Iran’s post-revolutionary constitution and legal system.

Turkey’s organized political opposition has likewise found itself in a vulnerable spot since the coup. All major Turkish parties opposed the coup, but a hard push against Erdogan could now lead to accusations against anyone of disloyalty to the Turkish state. This could be particularly true of the more liberal and Kurdish-dominated Peoples’ Democratic Party (HDP), which has been accused of siding with the armed and rebellious Kurdistan Workers’ Party (PKK). Erdogan could soon use the fight against the PKK insurgency to further tighten his grip on power by linking the coup to internal national security threats and the forces of secularism.

Furthermore, Erdogan could use the attempted coup as an excuse to create a powerful presidency that bypasses other elected institutions such as the parliament. Before the coup, Erdogan’s effort to amend the constitution seemed uncertain; but he may now push for constitutional amendments that could effectively make him president for a long time, if not for life. Increasingly, Turkey is witnessing a personality cult being built around Erdogan, who now portrays himself as a “savior” to the nation. Even the once powerful Justice and Development Party (AKP) and its senior leaders, many of them sidelined, appear to be becoming a vehicle for Erdogan’s power grab.

Finally, it’s important to note that the Islamist attempt to consolidate power in Iran has never entirely stopped. It has been a gradual process that continues even today, especially in the country’s educational institutions. Iran’s current supreme leader has always been particularly eager to rid the country’s massive university system of secular educators. His efforts to do so were particularly successful under former President Mahmoud Ahmadinejad, who fired thousands of university professors and deans and even expelled students deemed political opponents. The purging of Iran’s schools has largely stopped under current President Hassan Rouhani, but the security establishment, especially the IRGC and Basij, continues to view the educational system as a source of perpetual opposition.

The Erdogan government has sought in similar fashion to purge Turkey’s educational system, with thousands of professors and deans suspected of being “Gulenists” having been dismissed. The Turkish government has also introduced religious classes into the public school system and may even be trying to create a separate religious educational system funded by a new state-controlled foundation.

The analogy between Islamist Iran and a possibly soon-to-be Islamist Turkey is not perfect. Erdogan and the AKP have won repeated elections; Turkey has not witnessed a popular revolution; and the current crisis was triggered by the coup against Turkey’s elected government. Secular institutions such as the military, while much diminished, have not been completely crushed. It is also possible that the Gulenist movement that supposedly organized the coup and has been the main target of the subsequent purges does pose a major threat to Erdogan’s rule, as the president has repeatedly claimed. And even despite his use of similar authoritarian tactics, such as suppressing forces that once helped his rise to power, Erdogan is no Khomeini; he does not possess Khomeini’s massive national following and unsurpassed religious authority

But, like in the Islamic Republic, Erdogan treats the Islamization of the state and society as a gradual process dependent on opportune moments — and, like in the Islamic Republic, Erdogan has undermined all institutions, such as the media and academia, that can challenge his authority. Most disconcerting for Washington, Erdogan has relied on anti-Americanism to burnish his credentials, thus undermining a crucial alliance in the fight against the self-proclaimed Islamic State and other regional threats. It may be difficult to imagine now, but Iran was once a close U.S. ally in the region before becoming Washington’s foremost opponent.

Turkey and Iran may differ, but the most striking similarity cannot be missed: Millions of Turks and Iranians once saw their nations as escaping the confines of military and monarchic rule, only to see themselves in the clutches of authoritarian religious regimes. Iran’s tragedy began in 1979; Turkey has now started its own perilous journey.