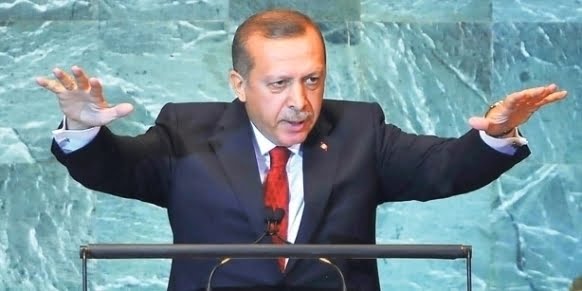 Contrary to his stance today, Erdoğan has on a number of occasions, when visiting the schools abroad and attending ceremonies of the Turkish Olympiads, thanked thousands of Turkish teachers working in internationally-located Turkish schools that have contributed to spreading the use of Turkish as a global language abroad. Erdoğan and members of his Justice and Development Party (AK Party) government have visited numbers of Turkish Schools several times in abroad. Praising the organizers of the event, Erdoğan said internationally-located Turkish schools struggle for reaching world peace. He also hailed Gülen for his contribution to world peace.

Since December 2013, Erdoğan has claimed that the Gülen movement — also known as the Hizmet movement — and its sympathizers in state bureaucracy were behind the corruption probes, but he failed to present any evidence documenting this claim. Gülen has also denied any connection to the corruption investigations.

Gülen has generally avoided responding to Erdoğan’s insults and offensive remarks, but has made it clear that he will strongly defend his convictions in Islamic teachings that prohibit corruption, favoritism and the peddling of influence. He also said he will continue to advocate principles such as accountability and transparency in government, strengthening the rule of law and full respect for fundamental human rights.

Erdoğan, who is currently on a tour of certain African countries, is pressing ahead with campaigning for the closure of the Turkish schools affiliated with the Gülen movement in African countries. During his visit to Ethiopia on Thursday, the state Anadolu news agency quoted Erdoğan as saying: “In the countries we visit we have been talking about the status of these schools and saying they should be closed down.” Erdoğan also said he has been telling African authorities that the Turkish Ministry of Education is ready to offer the same service provided by these schools. “The ministry is close to finishing its preparations to that effect,” he said.

The Gülen movement, having considerable successes in the field of education, enjoys significant prestige in many countries around the world, and has come to be perceived as international prestige for Turkey too. Although these schools have been operational in more than 160 countries around the world, there is not a single incident showing that they are at odds with the local authorities in their respective countries. Academic researches, journalistic observations and reports by local authorities consider these schools to be basic tools for a vision of peace on a global scale.

During the heat of the Gezi Park protests — a demonstration that began with protecting a green space in Taksim square of İstanbul on May 2013 but turned into a nation-wide anti-government protest — Erdoğan spoke at the closing ceremony of the 11th Turkish Olympiads on June 16, 2013, and slammed protesters amid a roar of approval from thousands of spectators. He said the “real Turkey” representing most parts of Turkey had gathered at a stadium.

On June 14, 2012, also delivering a speech at the closing ceremony of the 10th Turkish Olympiad, Erdoğan invited Fethullah Gülen to return to Turkey from his self-imposed exile in the US. In the same year, the Turkish State Mint minted special TL 1 coins to honor the 10th year of the Turkish Olympiads.

At the fourth general assembly meeting in March 2012 of the Turkish Confederation of Businessmen and Industrialists (TUSKON) — a global business platform affiliated with the Gülen Movement — then-Prime Minister Erdoğan praised TUSKON for carrying the Turkish flag and Turkey’s name to even the most remote areas of the world, with the support of the Turkish schools in those countries. “TUSKON takes its strength not from interest groups but from the nation. It gets its power, motivation, vision and mission from the nation,” Erdoğan said. Erdoğan noted that patriotic businessmen like TUSKON members find support in the Turkish nation instead of relying on “dark powers” and that they “conquer hearts” all around the world.