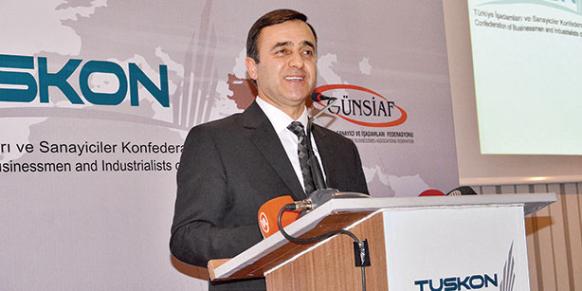 “This must not be forgotten: Investments will not come to a country where ideas cannot be freely expressed and where news cannot be conveyed freely to the public,” said Meral. “As members of the business world, we view the raid against Samanyolu and Zaman as a coup waged against democracy and press freedom,” he added.

A total of 27 people, including Zaman Editor-in-Chief Ekrem Dumanlı and Samanyolu TV (STV) Chairman Hidayet Karaca, from 13 provinces were taken into custody on Sunday in a move that has widely been interpreted as a crackdown on media outlets close to the Fethullah Gülen-inspired Hizmet movement.

“We are witnessing efforts to cover up the extensive corruption allegations that came out on Dec. 17 and 25. They are silencing everyone for this purpose. This includes the business world and members of TUSKON. The state is using all of its strength to exert tyranny and intimidation,” said Meral.

The Dec. 17 and 25 corruption investigation was officially dropped on Tuesday after a court rejected an appeal to reverse its earlier decision to not proceed with the case.

“We will not consent to such persecution nor obey such oppression,” said Turkish Health and Social Services Union (TSS) President Önder Kahveci, saying Turkey descended further into a state of lawlessness with Sunday’s raid.

“We denounce this lawlessness, we protest it and we would like to send a message to the independent representatives of the free press that you are not alone,” said Active Educators Union (AES) President Osman Bahçe, commenting on the recent media operation.