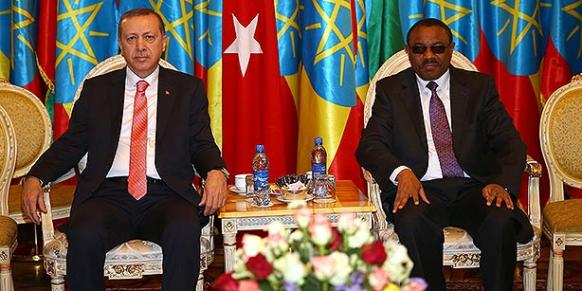 President Recep Tayyip Erdoğan is pressing ahead for the closure of Turkish schools affiliated with the Gülen movement (Hizmet movement) of Turkish Islamic scholar Fethullah Gülen in African countries.

“In countries we visit, we have been talking about the status of these schools and saying they should be closed down,” Erdoğan was quoted as saying by the state Anadolu news agency during a visit to Ethiopia on Thursday.

Erdoğan also said he has been telling African authorities that the Turkish Education Ministry is ready to offer the same service provided by these schools. “The ministry is close to finishing its preparations to that effect,” he said.

The Turkish president has declared Gülen’s Hizmet movement, a former ally, a treasonous enemy after a corruption scandal involving people in his inner circle that erupted with a wave of detentions on Dec. 17, 2013. He openly declared last year that he would do whatever it takes to eliminate the “parallel structure,” a term of his invention to refer to alleged sympathizers of the movement within the state bureaucracy, even if this requires a “witch-hunt.”

There are more than 100 Gülen-inspired schools in Africa, as well as other parts of the world. The government praised these schools in the past as key institutions promoting Turkish culture abroad.