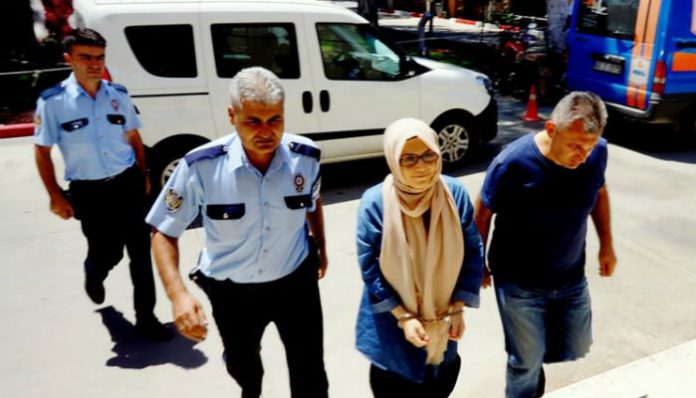 A female Turkish journalist who was in pre-trial detention for nine months has been subjected to inhumane and degrading treatment in police custody after she was re-arrested when a court decision to release her was not enforced, according to her lawyer.

Hanım Büşra Erdal, a court reporter and a lawyer, was subjected to a strip search at the police station and humiliated by police officers when she was taken from her prison cell as she was preparing to leave the prison after the judge ordered her release from pre-trial detention. Erdal, whose indictment lacks any evidence of violent or terrorist activity and only cites her articles in the critical Zaman daily, was ordered released pending trial on March 31.

However, following outrage in pro-government circles who wanted her to remain in jail indefinitely, another arrest warrant was issued that same day, before she was able to take one step outside the prison walls.

As if crushing her hopes of freedom were not enough, Erdal was taken to a police station and detained there for a day before she was returned to prison. Despite the fact that she did not present any risk of possessing contraband or a weapon as she was directly transferred from her prison cell, police strip searched her and humiliated her for hours as part of an unlawful punishment that amounted torture, her lawyer alleged in court, saying that Erdal has been traumatized by the experience.

Attorney Ümit Kardaş told the court on April 27 that “my client was subjected to inhumane treatment. She won her freedom but was put back in jail. A month has passed since her terrible ordeal at the police station, but she has not yet recovered from that trauma.”

While the lawyer was defending her in court, Erdal burst into tears. “You could say this was torture and abuse,” Kardaş stated.

He said a strip search is allowed only if circumstances so warrant. “She is a journalist and was taken from the prison. She was already going through routine checks and searches in prison. By forcibly removing her clothes while in police detention, the government wanted to humiliate and abuse her,” Kardaş alleged.

He said the independence of the judges was also violated since they were dismissed immediately after the decision to release. “The logic here is clear: These people won’t be released no matter what,” he said.

Erdal was arrested on July 29, 2016 on terror charges, subsequently indicted and now faces 10 years in prison over her articles in the Gülen movement-affiliated Zaman newspaper, which was seized by the government in March 2016 and subsequently shut down.

The journalist surrendered herself despite the fact that she had multiple visas for European countries and the United States and could have easily left the country. She has been in pre-trial detention since then. During the first hearing in the trial, she was released along with other 21 journalists who faced similar charges of terrorist activity because of their articles, comments and critical tweets.

Erdal is among scores of journalists jailed after a failed military coup in Turkey on July 15, 2016. Immediately after the putsch, the Justice and Development Party (AKP) government along with President Recep Tayyip Erdoğan pinned the blame on the Gülen movement despite the lack of any evidence to that effect and has shut down dozens of media outlets in addition to incarcerating their employees, earning the dubious honor of being the biggest jailer of journalists in the world.