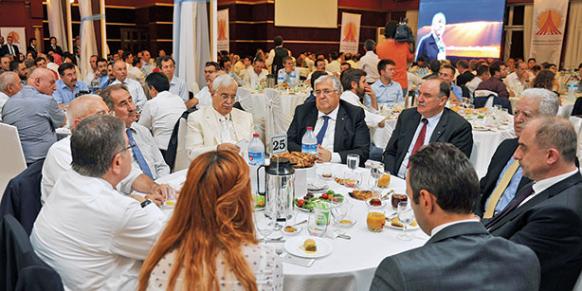 Many politicians, artists, intellectuals, businessmen and celebrities attended the fast-breaking dinner organized by the Journalists and Writers Foundation.(Photo: Cihan)

A message of tolerance, dialogue and coexistence for people of different faiths and ethnic backgrounds was dominant at a fast-breaking dinner organized by the Journalists and Writers Foundation (GYV) on Thursday.

“We have capital no other than love, no intention other than serving humanity,” Mustafa Yeşil, head of the GYV, said at the fast-breaking dinner, which was held under the theme “Toward Universal Peace.” Representatives of foreign diplomatic missions based in Ankara and media and political figures also attended the dinner. This is the 20th year the GYV has been organizing fast-breaking dinners during Ramadan.

Turkish Islamic scholar Fethullah Gülen, whose ideas inspired the faith-based Hizmet movement, sent a message to the event in which he called on the nation to launch a process of purification and repentance so that a climate of peace and tolerance can be reestablished in the country.

Following a sweeping graft probe that came to public attention in December of last year, Prime Minister Recep Tayyip Erdoğan has been verbally attacking the Hizmet movement, claiming without providing any proof that Hizmet is involved in treason. The GYV is an organization affiliated with Hizmet.

Following an introductory speech by Hüseyin Mercan, the Ankara representative of the GYV, Yeşil drew attention to how radically the country’s agenda has changed since Ramadan last year. Noting that the topic of discussion at last year’s fast-breaking dinners was the delay in the writing of a new constitution, the GYV head said, “A year later, I must sadly admit that we are talking about problems about the implementation of the rule of law at a basic level.”

In an apparent reference to Erdoğan’s harshly critical and sometimes insulting language toward the Hizmet movement, even during Ramadan when people are fasting, Yeşil underlined that such an attitude does not befit a Muslim. He said: “When you indulge in hate speech, polarize people while you are fasting … you can be no longer be said to be truly following Ramadan, nor can your daily prayers be seen as valid.”

The Hizmet movement promotes interfaith dialogue and the resolution of problems through peaceful methods all over the world. However, Erdoğan’s ruling Justice and Development Party (AK Party) has been at odds with Hizmet, especially since Dec. 17, 2013, when the graft operation implicating senior government members became public. The prime minister claims the operation was orchestrated by the Hizmet movement with the motive of overthrowing the AK Party government.

Similarly to Gülen, GYV head Yeşil underlined that settling problems with love-based conversations is the way to resolve all differences. He said: “Uncivilized people believe they can achieve their aims through fighting. Civilized people build a shared wisdom and conscience through contemplation and dialogue. … We believe healing with love is the most enduring solution.”

Below are comments by some of the participants:

Ertuğrul Günay (former AK Party culture and tourism minister): “At former [fast-breaking dinner] meetings, important people were more numerous than ordinary people. I have observed that tonight, for the first time, important people appear less prominently than ordinary people. I take this as a good sign. As long as a nation is doing something for its future, no power can destroy it.”

İdris Naim Şahin (former AK Party interior minister): “As we know, it is [God] who is the owner of all that is beautiful and we believe it is from him that all problems also come. … It is not the aim of our existence to possess a lot or to eat at richly decorated tables. What is good is to come together and share a bite to eat.”

Faruk Loğoğlu (deputy chairman of the main opposition Republican People’s Party [CHP]): “We have heard a speech which I listened to very carefully and found illuminating; we heard a very important message tonight. My wish is to move forward in solidarity and love in order to turn the expectations and messages that were expressed in this speech into reality. I hope we will be able to do this. This is an opportunity before us.”

Masum Türker (leader of the Democratic Left Party [DSP]): “I am here to show that I will never abandon you. We observe today that you [attendees] are not among those who exploit Islam and the Quran in politics, [who] use hate speech. … The best answer to be given the people who do is: ‘You can continue to hate [us], but we will, being people created by God, continue to love you’.”