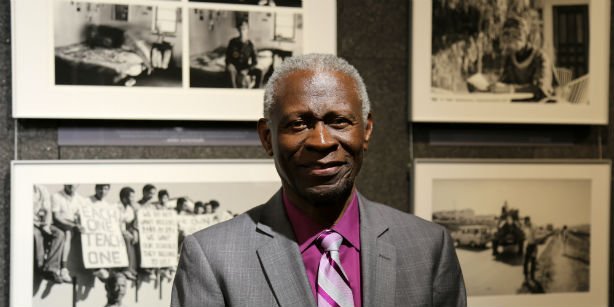 Carter, who presented Gülen its 2015 Gandhi King Ikeda Peace Award by the Martin Luther King Jr. International Chapel at Morehouse College in April, spoke with the Cihan news agency in Johannesburg after a conference he held at the Nelson Mandela Foundation on the Gülen movement inspired by Gülen.

Stating that Gülen among “great personalities” like Daisaku Ikeda, Nelson Mandela and Martin Luther King who are deeply committed to Mahatma Gandhi’s philosophy of peaceful resistance and strongly reject violence.

When responding to a question why Gülen was selected for the 2015 Gandhi King Ikeda Peace Award, Carter said he looked for a “peace envoy” in the Muslim world for 15 years and he finally came across with Gülen, whose teachings reached 192 countries acrıss the world.

He said they decided to give the award to Gülen, who was the first Muslim to condemn the Sept. 11 attack in 2011.

Stressing that Gülen managed to make people who are even against Islam approve his opinions through the “unprecedented” Hizmet movement, Carter said Gülen represents a beautiful face of Sunni Islam with his stance against violence and terrorism.

Noting that a portrait of Gülen was hung in the Martin Luther King Jr. International Chapel at Morehouse College for his peaceful teachings that motivate the world, the professor added that he “proud” of selecting Gülen as the recipient of the award, which is designed to promote the importance of positive social transformation by honoring “those who demonstrate extraordinary global leadership toward reconciling differences.”

Gülen is a Turkish Islamic scholar well-known for his teachings promoting mutual understanding and tolerance between cultures. Now residing in the US, he has pioneered educational activities in a number of countries, along with efforts to promote intercultural and interfaith activities around the world. He has written more than 50 books in Turkish, some of which have been translated into several languages.

The Gülen movement inspired by him has spread to more than 180 countries around the world and has a vast network of schools, charity organizations, health institutions and cultural dialogue centers. The volunteers of the movement often have to confront dire conditions in countries they serve, ranging from Ebola-stricken nations in Africa to conflict-ridden countries in the Middle East.