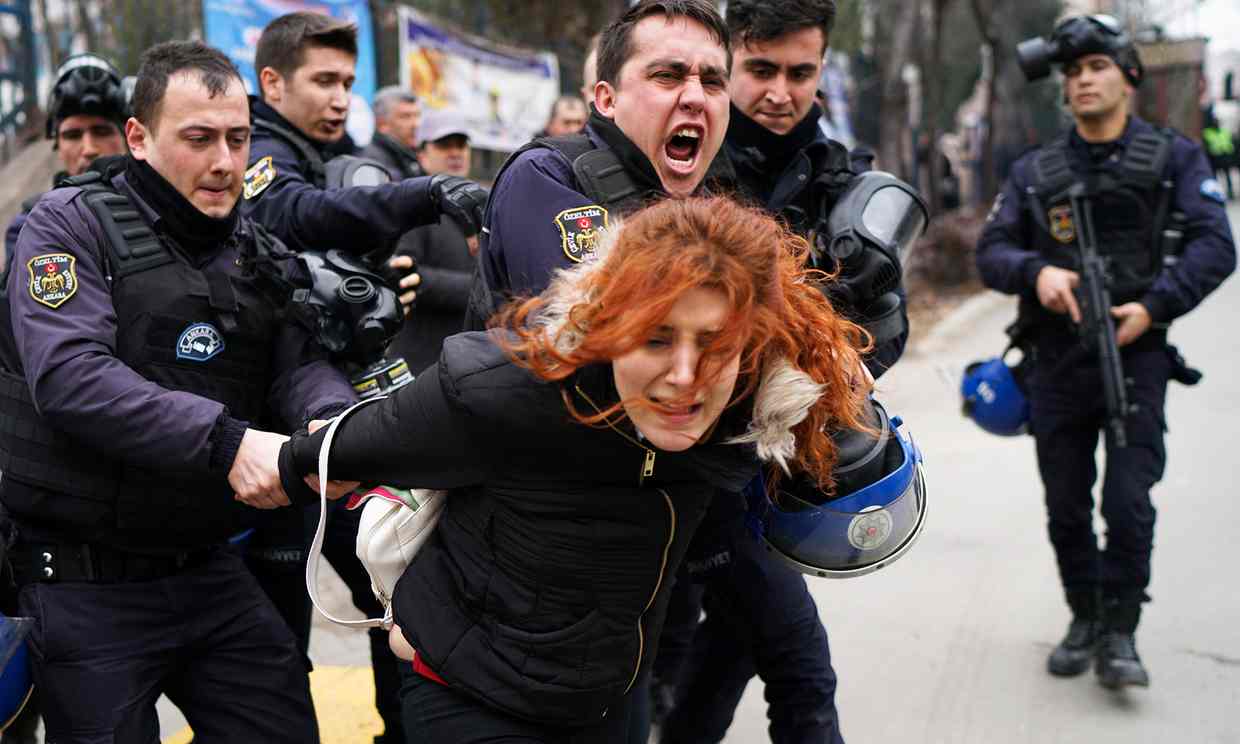 Riot police detain a demonstrator during a protest against the dismissal of academics from universities. Photograph: Umit Bektas/Reuters

On 1 September, the life of Ahmet and Fatma Özer*, married teachers from Istanbul, changed dramatically. Accused of being sympathisers of Fethullah Gülen, both were fired. On the same day Ayse Yilmaz*, a law student, received a text informing her that her father, a civil servant, had been detained for alleged involvement in terrorism and coup plotting. “It was the day we were blacklisted,” Fatma recalls. “The day we were erased as citizens.”

The Justice and Development party (AKP) government accuses Gülen, an Islamic cleric who lives in the US, of organising the bloody coup attempt on 15 July. However, the extent of Gülen’s involvement remains unclear. Nevertheless, those who have expressed even the slightest sympathy with the cleric’s views, or who have made use of his businesses – which include a bank, schools and media organisations – have found themselves accused of coup plotting, like the Özer and Yilmaz families.

On 20 July last year the president, Recep Tayyip Erdoğan, declared a state of emergency, enabling him and the AKP cabinet to bypass parliament and rule by decree. The crackdown on possible coup plotters has since been turned into an all-out witch-hunt not only against alleged Gülen sympathisers but also leftists, Kurds and anyone critical of the government.

Yilmaz’s father has been in jail for almost six months. There is no indictment. The case file, their lawyer was told, is secret. “They asked him if he stayed in a Gülenist dorm, if he received a scholarship during his university years,” she explains. “The lawyer cannot appeal against a case he gets no information about.”

Since the coup attempt, more than 125,000 people have been dismissed from state jobs, and more than 45,000 are in jail on terrorism charges, including military personnel and police officers, but also large numbers of journalists, academics and civil servants. Erdoğan has repeatedly vowed to “root out” the entire Gülen network and threatened to reinstate the death penalty and “let the people take revenge”. The president, who wants to turn Turkey’s parliamentary system into a presidential one via popular referendum, is using the coup attempt as an excuse to rid himself of all unwanted critics.

“Many people have been dismissed not because they misused their positions, but because of their opposition to the AKP and Erdoğan,” says Andrew Gardner, Turkey researcher for Amnesty International. “If the state wants to bring proceedings against people, they need to do so based on individualised proof. But what we are seeing are blanket accusations against which people are unable to appeal.”

Ahmet Özer agrees. “I am not sure what we are accused of exactly,” he says. He has been teaching for over a decade. Neither he nor his wife received an official notice, a justification or a court order. Instead, they learned of their dismissal via the internet. “Our names were published in the official gazette. That was all,” Özer said. Both had been suspended earlier in August. “We have no means to defend ourselves, but since our names are now associated with terrorism and coup plotting we are blacklisted.” His wife underlines that they opposed the coup and had never been politically active. The sudden lack of income has landed the Özer family in dire straits. Ahmet used to be a popular tutor, but parents are no longer willing to have their children taught by a “terrorist”. Others are too scared to employ him, lest they will be seen as sympathisers. No school will hire him. He has been looking for day work in factories and textile workshops to earn at least a little money, so far unsuccessfully.

“Each time the people there ask: ‘Why did you quit your teaching job?’”, he explains. “And since my name is on a publicly accessible list it is no use to lie. So far I have not been able to find any work.”

Gardner underlines that being fired via decree does not only mean the loss of a job, but potentially loss of opportunity to work altogether. “Due to the decrees, fired police officers are banned from working in private security. Sacked judges and prosecutors are banned from practising as private lawyers.” Companies are scared to hire alleged Gülen supporters.

The Özers know they are comparatively lucky. Their parents have been able to help them out financially, at least for a little while. But that money is not safe either. “It is possible that the government freezes our assets at any moment,” Ahmet says. The couple now only use cash, too scared to put money into their bank account, lest it is confiscated without warning. This has happened to others, they say. The judges and prosecutors’ union has opened a donation account for members whose assets and bank accounts were seized overnight, leaving entire families penniless. “Hungry judges, imagine that,” Fatma whispers. “But that, too, is now reality in Turkey.”

For those dismissed or arrested on charges of being a member of the Gülenist network, lawyers are hard to come by. Many, including legal aid lawyers, refuse to take up their cases, either because of revanchist sentiments or because it seems too dangerous to defend the government’s sworn enemies in the current atmosphere. Some have reported threats for taking on these cases. Other lawyers that do take up their cases work for what one human rights activist described as “astronomical fees”. The Özer family is unable to afford such legal assistance. “There is a real black market now,” says Ahmet. “Those lawyers ask hundreds of thousands of lira; it’s impossible for us.”

Yilmaz’s father has been in jail for almost six months. There is no indictment. The case file, their lawyer was told, is secret. “They asked him if he stayed in a Gülenist dorm, if he received a scholarship during his university years,” she explains. “The lawyer cannot appeal against a case he gets no information about.”

The hardest thing for her father, a civil servant of over two decades, is not knowing what he might have done to deserve being in prison. Under emergency rule, detainees can be held without access to lawyers for up to five days and lawyers have no right to speak to their clients in private. “They tape all the conversations and send them to the prosecutor,” Yilmaz explains. “A guard is present during each consultation in prison.” This, Gardner underlines, impedes the right to a fair trial and keeps victims from reporting torture and ill-treatment to their lawyers. Human rights groups, such as Amnesty International and Human Rights Watch, have documented such practices in Turkish prisons.

“Every time a new emergency decree is published I panic,” she says. “Each time the doorbell rings I fear that it might be the police that have come to take my mother, too.” Yilmaz says all her family knows is that a secret witness has claimed her father belonged to the Gülen network. “But prosecutors tell those accused to give up names in order to get out of jail. My father was told that he would not get out of jail if he did not give them some names. People turn into informants to save themselves.”

The Turkish media has reported cases of business rivals, spurned admirers and angry spouses denouncing people in order to get revenge.

A little over three months after their dismissal, the Özers’ social security was annulled, resulting in the cancellation of state health insurance for them and their children. There is no money for private coverage. “The stress of the past months has had an impact on my health,” Fatma says. “But without insurance I cannot go to see a doctor.” The couple do not know how the cancellation of their social security will impact on their pensions. Both have worked, and paid into the state fund, for over a decade. “Nobody gives us any information,” Ahmet says.

Yilmaz, a successful law student, says that her trust in the Turkish justice system has all but vanished. “My beliefs and my idealism are gone,” she says. “This is a reign of fear, not justice.” She adds that she wants to go abroad to live and work there. “I do not want to serve a country that treats its citizens this way.”

For the Özers, the hardest part is the uncertainty, the fact of not knowing what they did wrong and therefore how to make it right again. Family members, friends and neighbours have turned their backs on them. “Much worse than the sudden lack of employment and an income is the complete isolation,” says Fatma. “We used to have visitors over all the time. Now people have either abandoned us or are too scared to even call.” The couple took their children out of their old school, for fear they would be targeted by teachers and other students.

“The government does not treat us as equal citizens of this country,” Fatma says, “It feels like they want us all just to disappear. I feel like I have been buried alive.”

* Names have been changed