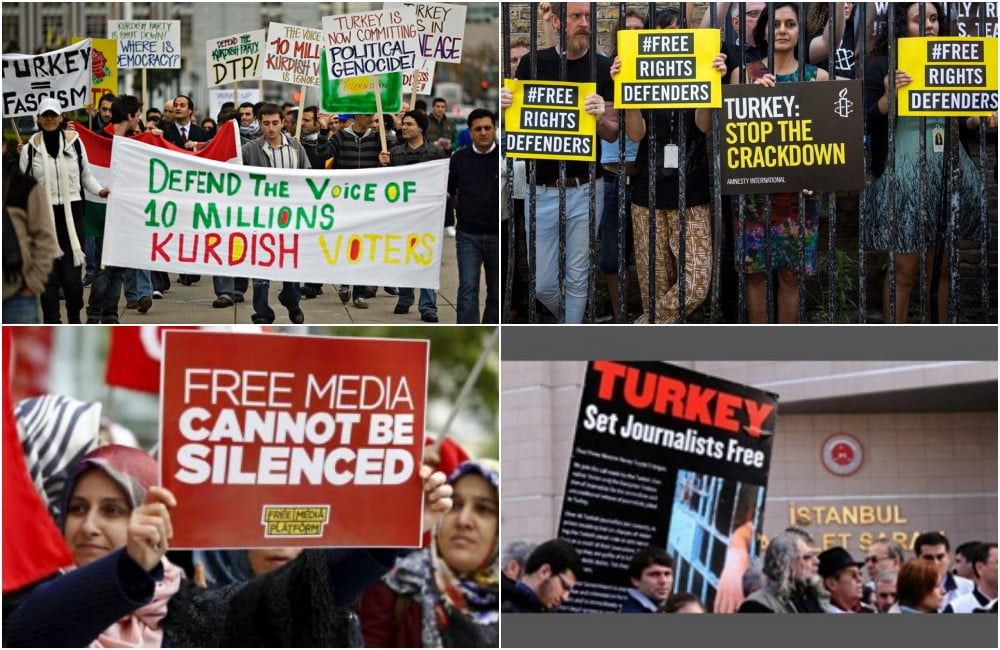 The prosecutions and convictions of lawyers, including those with a focus on human rights,  the HRW report said, points to the Turkish government’s abusive use of terrorism charges.

An estimated 119 journalists and media workers are in pre-trial detention or jailed on charges of “spreading terrorist propaganda” and “membership of a terrorist organization,” it said.

Tens of thousands of people have been jailed pending trial and some 150,000 civil servants, military personnel and others sacked or suspended from their jobs as part of a crackdown by the Turkish government following the July 15, 2016 coup attempt.

“Executive control and political influence over the judiciary in Turkey has led to courts systematically accepting bogus indictments, detaining and convicting without compelling evidence of criminal activity individuals and groups the Erdoğan government regards as political opponents,’’ the report said.

The largest number of those targeted by Ankara are alleged to have links with the Gülen movement, a religious group led by U.S.-based cleric Fethullah Gülen, who the government accuses of masterminding the failed putsch.

An estimated 8,500 people, including elected politicians and journalist, remain in prison on remand or following conviction for alleged links with the outlawed Kurdistan Workers’ Party (PKK), an armed group that has been at war in Turkey for over three decades, the report said.

The Turkish presidency’s judicial reform amendment package, which was adopted by parliament in October, while amending various laws, was “too generalized and vague to offer hopes of genuine measures to address the deep and pervasive deficiencies of Turkey’s justice system,’’ the report said.

Turkish authorities continue to block websites and order the removal of online content while thousands of people in the country face criminal investigations, prosecutions, and convictions for their social media posts.

The report pointed to a dramatic rise in the number of prosecutions and convictions on charges of “insulting the president” since President Recep Tayyip Erdoğan’s first election as president in 2014.

The government of Turkey, home to 3.7 million Syrian refugees, has unlawfully deported some Syrians from the country’s commercial capital of Istanbul and other provinces to Syria, it said, “including after coercing some of them through violence, verbal threats and the threat of indefinite detention into signing voluntary return forms’’.