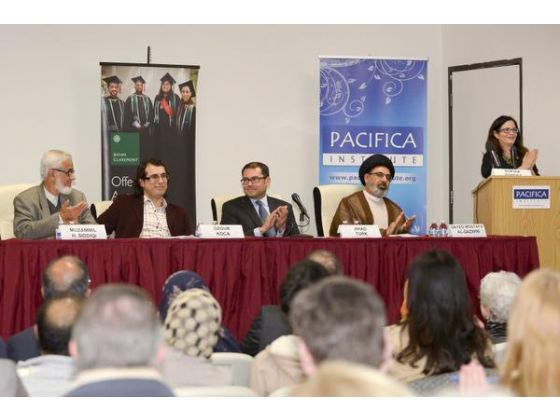 Along with the lives they destroy and extinguish, terrorists who commit these heinous acts in the name of Islam also hurt the global community of Muslims, a majority of whom lead peaceful, productive lives.

This was the message a panel of speakers tried to drive home Tuesday night during a program titled “Muslim Voices Against Extremism,” hosted by the Pacifica Institute in Irvine. Two Orange County imams were among the several speakers who addressed an audience of about 200 people.

All of the speakers vociferously condemned the recent terrorist attacks in Paris.

“We have always said these are horrible, unacceptable crimes against humanity and will continue to say so,” said Imam Muzammil Siddiqi, director of the Islamic Society of Orange County in Garden Grove. “Even though Muslims continue to express their outrage, it seems that the public has selective hearing.”

Imam Sayed Mostafa al-Qazwini, president of the Shia Muslim Council of Southern California, explained why radical fringe groups have emerged from “one of the most peaceful religions in the world.”

“Islamic extremism is a product of dictatorship and totalitarianism in Islamic-majority countries,” he said.

Add to that the absence of pluralism and poor socio-economic conditions, and you have an explosive situation. Worldwide, Muslims lack critical study of their own religion because they have neither the freedom nor the facility to gain the knowledge, Qazwini said. Millions of Muslims leave their homelands because of the absence of dignity or human rights, he said.

“Unless we put an end to dictatorship, we cannot get rid of terrorism,” Qazwini said.

The central theme of Islam is and has always been mercy and goodness, said Ozgur Koca, professor of Islamic Studies at Claremont Lincoln University.

“The real problem in Islamic countries is political and economic, not religious,” he said.

But Koca said that is no excuse for Islamic fundamentalism that is ripping the world apart. It is important for Muslims around the world to condemn terrorism “without a ‘but’ or ‘however.’”

Koca also urged Muslims to look closely at their religion and its centuries-old traditions.

“We should approach our own tradition with a critical eye, especially in issues that relate to gender equality,” he said.

The Prophet Muhammad himself shunned age-old practices of his tribe in Mecca that were common during his time, said Jihad Turk, president of the Bayan Claremont Islamic Graduate Studies School.

“An example was female infanticide,” he said. “He stopped the heinous practice where people would bury alive female children because they preferred male heirs.”

Turk said the Prophet Muhammad did not blindly follow tradition, but questioned it and urged his followers to do the right thing and, always, to choose peace over war.

Irvine resident Gary Fouse, who was in attendance, said he understands the message the speakers were attempting to convey.

“No one wants to blame all the Muslims for terrorism,” he said. “Most Muslims are living peacefully. I’m glad these religious leaders are condemning it and I’m all for dialogue.”

But Fouse, a Christian, said he is deeply concerned about the persecution of Christians and Jews worldwide.

“In Europe, Jews are being persecuted by Muslims,” he said. “Jews experience tremendous hostility from young Muslims. These issues need to be addressed and prioritized.”

Tom Westesson, of Huntington Beach, said he wanted to hear the panel talk about ISIS, the Islamic State group.

“ISIS presents a serious threat for the U.S. and other countries,” he said. “I was hoping to hear what the Muslim community is going to do to stop ISIS, but their answers don’t really satisfy me. But I understand that terrorism has little to do with religion. They’re just angry people.”

Jack Hochadel, of Newport Beach, said he learned something new from the panelists.

“I had no idea that the Quran strongly encourages pluralism and specifically instructs Muslims to co-exist peacefully,” he said.

The panel also discussed the role media play by sensationalizing terrorist acts and ignoring the work of peacemakers.

“If we had convened this panel to talk about how we can help ISIS, you can rest assured the response would have been overwhelming,” Westesson said with a laugh. “And this place would’ve been filled with the media.”

But that does not mean they should stop continuing the dialogue and promoting better understanding, Koca said.

“As Muslims, we should stand up against extremism,” he said. “We need to be bold and make sure our voices are heard.”

At a workshop on Turkish-Jordanian relations organized by the Journalists and Writers Foundation (GYV) in İstanbul on Wednesday, top aide to the prime minister and Ankara Deputy Yalçın Akdoğan said that Turkey pursues a value-based foreign policy, not one based on national interests. Stating that Turkey approaches its region with the idea of soft power and adhering […]

We appreciated the beauty of spring better than ever and this was one of those time “when beauty whispers to the heart.” It was the motto of a very meaningful interfaith conference organized by Peace Island Institute in Connecticut, Sacred Heart University and Fountain Magazine. Our distinguished speakers discussed the concept and expression of “Beauty” in Abrahamic traditions from two perspectives: nature and art.