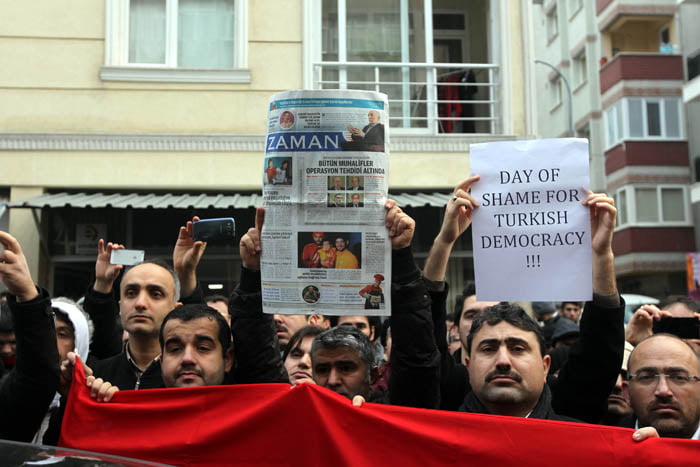 A total of 31 people — mostly high ranked media personnel, directors and producers of popular television serials and police officers — were taken into custody by the police.

Hadi Salihoğlu, the prosecutor in charge of the investigation, said in a statement that the suspects were detained on charges of establishing, heading or being a member of a terrorist organization. Fraud and slander are also what some of the suspects are accused of, the prosecutor said.

The Zaman daily and the Samanyolu television station are among the media outlets which have been critical of the government for alleged corruption since two major graft probes went public in December of last year. The police operation came just ahead of the first anniversary of graft probes on Dec. 17 and 25 of last year.

Among the several police officers who were detained are Tufan Ergüder and Mutlu Ekizoğlu, former heads respectively of the Anti-terrorism Unit in the İstanbul Police Department and of the Department of Organized Crime.

Salih Asan, producer of two television serials broadcast on Samanyolu television — Tek Türkiye (Undivided Turkey) and Sungurlar (Falcons) — and Engin Koç, Sungurlar’s director, are also among those detained in the police operation. They were taken into custody from their homes in Eskişehir.

The operation came shortly after Parliament passed a law on that enabled prosecutors to detain people based on reasonable suspicion.

Fikret Duran, Karaca’s lawyer, told reporters in front of the İstanbul Police Department that the detaining of the suspects was illegal, as the arrest warrants were issued by a prosecutor rather than a judge as required by law.

Noting that it was only last Friday that President Recep Tayyip Erdoğan approved the judicial package recently passed by Parliament, Duran said, “It looks as if the operation was waiting for the package to be passed.”

The operations, which were launched simultaneously in 13 provinces, seem to target a so-called “parallel structure” which President Recep Tayyip Erdoğan has accused, after the two graft probes were made public on Dec. 17 and 25 of last year, of being behind the probes.

Erdoğan has claimed, without providing any solid evidence, that the Hizmet movement, which he describes as “parallel structure,” was part of a plot to overthrow the government. He also asserted that some police officers and members of the judiciary who are sympathizers of Fethullah Gülen, the inspiration for Hizmet, act like a state within the state.

Nuh Gönültaş, a columnist for the Bugün daily and Makbule Çam Alemdağ, Tek Türkiye’s scriptwriter, are also among those detained.

Crowds of people protested the operation in front of both buildings. Thousands showed solidarity with the detained journalists by shouting, “The free media cannot be silenced,” ”Say stop to unlawfulness,” and “We do not fear the cruel.”

Still another slogan — “We did not eat ill-gotten food” — made reference to alleged corruption in the government, which, as was revealed by many audio clips leaked over the Internet following the graft probes, some Cabinet ministers and even President Erdoğan were also involved in.

In front of the Çağlayan Courthouse in İstanbul, thousands of people also gathered in a gesture of support for those taken into custody. The courthouse was surrounded by barriers to block passage by the police. Hundreds of police officers as well as two water cannons stood by in the vicinity of the courthouse.

In addition to several police vehicles that were stationed around the Zaman daily’s headquarters, a police helicopter hovered over the building when the police came to detain Dumanlı.

Several lawmakers who are former ruling AK Party deputies –İdris Bal, leader of the Democratic Progress Party (DGP), İdris Naim Şahin, one of the founders of the Party of Nation and Justice (MİLAD), and Hakan Şükür — paid a visit to the Zaman daily in a show of support to editor-in-chief Dumanlı before he was detained around noon by the police at the daily’s headquarters.

Bal visited İstanbul Police Headquarters to obtain information about the detained journalists, but was harassed by the police. Kani Kudu, an official from the DGP, said Bal was molested by a police chief who caught Bal in the arm and pushed him away. Kudu said they would take legal action against the police officer.

Ertuğrul Günay, another deputy who resigned from the ruling party last year, paid a visit to Zaman’s Ankara office in a show of support against the operation.

Although Samanyolu’s Karaca went early on Sunday, accompanied by his family and lawyer, to the İstanbul police to surrender, the state-run Turkish Radio and Television Corporation (TRT) announced that he was taken to the police station by the police, which is apparently part of government efforts aimed at creating a negative perception about the suspects.

His lawyer Duran said the detentions connected with the Samanyolu Broadcasting Group had to do with certain lines uttered in some television serials broadcast in previous years on the Samanyolu television channel (STV).

“Arrest warrants have been issued on this ground for scriptwriters, producers and [Samanyolu] Broadcasting Group General Manager Hidayet Karaca,” Duran said. He also told reporters 10 people from the Samanyolu media group were taken into custody.

Duran also said what the suspects were accused of and that the contents of the file are totally different from each other. “It is only to be able to issue an arrest verdict [the suspects are faced with] charges of committing a crime against the constitutional order. But the headline and the content [in the file] contradict each other.”

Police officers raided the Zaman daily early in the morning, as they usually did with other suspects, to detain editor-in-chief Dumanlı, but were not able to “fulfill their task” because of the pressure by supporters of the daily and had to leave the building, Salihoğlu said in his statement.

Dumanlı under strong protests by supporters.

In a news conference following the first police raid, Dumanlı said he was called to come down to see the police official, which he viewed as “nonsense.” “I am sitting in my office and I invited him to come and detain me,” he told the media.

Dumanlı said the protesters reacted in a peaceful and democratic way by only chanting pro-freedom slogans and that the police officials faced no physical resistance.

Avni said on Saturday night that the raids, which were originally planned to take place early on Friday morning, were postponed after he revealed the secret plans, and would be carried out beginning on Sunday.

The whistleblower tweeted that due to strong reactions to the initial operation planned to be carried out on Friday, the police limited the list of journalists to be detained. He said liberal and mainstream journalists will not be targeted “for now.”

The claim of mass detentions of some 400 people, including 150 journalists, was first publicized on Thursday afternoon by Avni, who says he is among President Erdoğan’s inner circle. He has revealed many government-backed police operations to the public in the past.