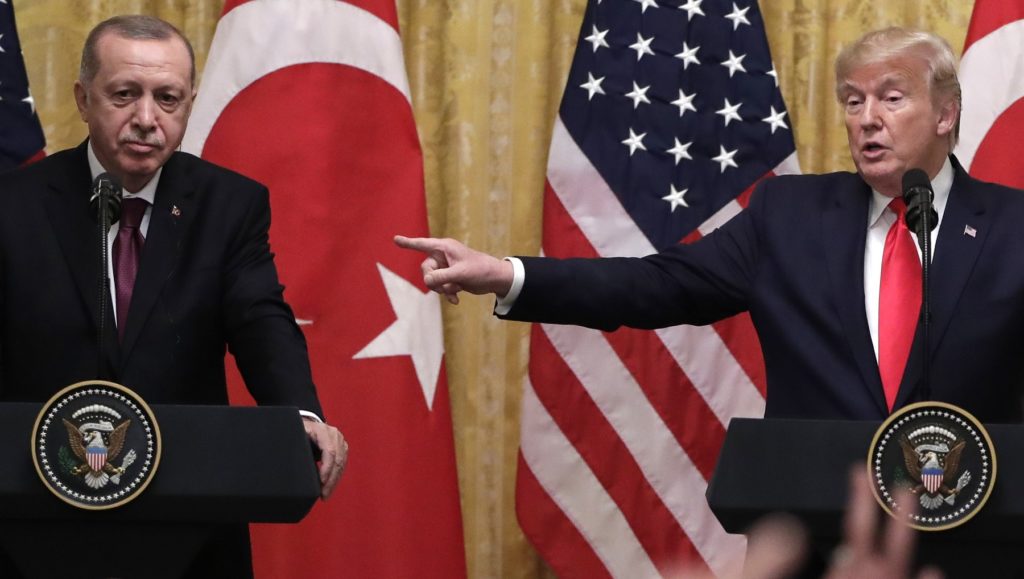 “I’m a big fan of the president,” said President Donald Trump at the joint press conference with Recep Tayyip Erdogan, adding that he had “a great relationship both personally with President Erdogan and with the great country of Turkey.” This was after a five-hour meeting at the White House on November 13. However, that visible show of warmth and friendship could not hide the growing tensions between the two countries.

Defying persistent objections from the U.S. administration, Turkey has purchased an air defense system from Russia. S-400 missiles were delivered in July 2019. The U.S. fears that Russia could gain access to American F-35 communications and defenses and has barred Russia from joint manufacturing or purchasing of F-35 war planes. Under U.S. law, the White House must impose sanctions on countries that acquire Russian defense equipment, but the Trump administration hasn’t done so, claiming that this system will not become operational until April.

Turkey resents the recent House resolution, passed overwhelmingly, that calls the 1915 massacre of 1.5 million Armenians a genocide. It is equally offended by another House resolution imposing sanctions on selected Turkish officials for the country’s invasion of Syria and the bombing of civilians, resulting in 100,000 people fleeing the area. Reportedly, the militia under Turkish control has also committed war crimes.

Turkey considers unacceptable the U.S. alliance with the Syrian Kurdish People’s Protection Units (YPG), which it alleges are collaborating with the Kurdish People’s Party (PKK) and are terrorists. These are the fighters who repelled the ISIS fighters from North Syria, having suffered thousands of casualties as partners of the U.S.

A serious bone of contention has been Turkey’s extradition request for a frail Muslim cleric, Fethullah Gulen, once an ally and now an opponent of Erdogan, who promotes moderate Islam all over the world and has run a number of businesses, charities, and charter schools. A green card holder, he lives in a 26-acre retreat in Saylorsburg, Pennsylvania, and faces terrorism and treason charges in Turkey for accusations that he was the mastermind behind the 2016 failed coup against Erdogan. Gulen has consistently denied the charges. After the failed coup, Erdogan purged thousands from the civil service, armed forces, and judiciary, claiming that they were Gulen followers. The administration has also severely restricted freedom of assembly, association, and movement. Turkey has the highest number of imprisoned journalists in the world.

Michael Flynn, an adviser to Trump’s 2016 campaign and later his first national security adviser, now convicted and to be sentenced in December, lobbied for Gulen’s extradition to Turkey. Subsequently, Trump’s personal lawyer and former New York Mayor, Rudy Giuliani, has also raised the issue of Gulen’s extradition frequently during his White House visits.

Under international law, the extradition process begins with a country seeking a person who had committed a crime in that country or has been found guilty of an extraditable offense. The crime must be recognized in both countries; under many treaties, it must be a severe crime, usually carrying at least a one-year sentence in both countries. The standard is “probable cause.” Political crimes are not usually allowed as the basis for extradition, but then again, interpretation of “political crime” lies with each country.

In the U.S., extradition is based on treaties, of which the United States has over 100. The request is made to the State Department and the Secretary of State conveys it to the Department of Justice, which weighs the evidence. Turkey has sought Gulen’s extradition since 2016, but the Justice Department has not found sufficient evidence to extradite him.

Turkey’s strategic importance cannot be overestimated. However, Erdogan’s personal friendship with Trump alone cannot resolve the difficulties. Even if Trump may be willing to find a way to extradite Gulen or find another country to accept him in order to placate a NATO partner for geopolitical reasons, he must not. Once again, the damage to the rule of law would outweigh any benefit Trump hopes to gain from such an action.

Ved Nanda is a distinguished professor and director of the Ved Nanda Center for International Law at the University of Denver Sturm College of Law. His column appears the last Sunday of each month and he welcomes comments at [email protected]