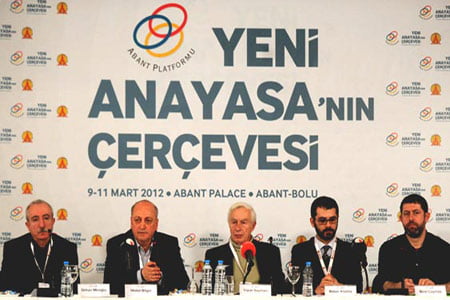 The prestigious Abant Platform, which has tackled pressing issues facing Turkey since its establishment in 1998, will aim in its next meeting to contribute to the shaping of Turkey’s new constitution.

The 26th Abant meeting, which will be held from March 9 to 11 in Turkey’s northwestern province of Bolu, will bring together a wide spectrum of intellectuals, lawyers, political leaders and journalists to discuss the problematic areas of, and propose solutions to, the constitutional drafting process. Parliament Speaker Cemil Çiçek will be among those attending the meeting.

Participants will examine the constitutional process through the following subjects — citizenship and identity, mother tongue education, local governments in the balance of a unitary state and autonomy, freedom of religion, religious education and the position of the president in the constitution.

Former head of the Supreme Court of Appeals Sami Selçuk, Turkish-Armenian biweekly Agos Editor Rober Koptaş and academics from various universities and journalists from Turkey’s many dailies will lead the discussions.

As with every Abant meeting, the platform will release a summary declaration arising from the discussions’ conclusions.

The Abant Platform is an independent think tank that takes its name from Lake Abant in the province of Bolu, the location of its first meeting. It is one of the most well-known programs of the Journalists and Writers Foundation (GYV).

The GYV was founded in 1994. Its mission and work were inspired by the GYV’s honorary president, Islamic scholar Fethullah Gülen.

SEVGİ AKARÇEŞME, ABANT/BOLU In the second day of discussions at the 28th Abant Platform meeting, participants leveled criticism at both Turkey and the EU while reiterating support for Turkey’s membership process at large. It was agreed that although Turkey’s long-term interests lie in EU membership, both sides suffer from fatigue as Turkey’s disappointment leads to […]