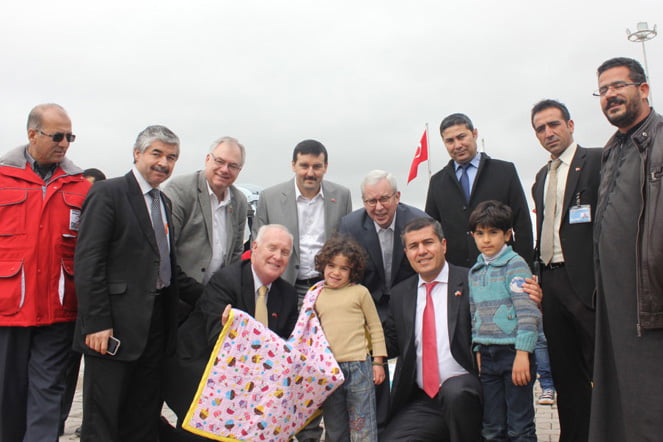 A group of civil society groups, including Turkish-American charity organizations, and local officials in Northern Virginia have collected 100,000 blankets for Syrian refugees in Turkey as winter is fast approaching, The Washington Post reported on Wednesday.

The Cihan news agency, which quoted from The Washington Post, reported that Embrace Relief, a sister charity organization of Kimse Yok Mu (Is Anybody There), along with the American Turkish Friendship Association (ATFA) and a number of municipalities in Northern Virginia collected blanket donations for Syrians in refugee camps in Turkey’s border provinces.

“Officials in Loudoun and Fairfax counties organized the first blanket drive last year after several local politicians, including Loudoun County Board of Supervisors Chairman Scott K. York and former Purcellville mayor Robert W. Lazaro, visited a refugee camp in Turkey and said that they were profoundly affected by what they saw: Thousands of Syrian refugees, many of them children, all crowded together in a sea of small tents,” The Washington Post wrote.

The report by Cihan also emphasized that the mayors decided to kick off such an initiative after they paid a visit to several refugee camps in Adana province last year and meeting with representatives of Kimse Yok Mu.

The Washington Post noted that the same charity groups and local officials had started a similar campaign last year and collected 18,000 blankets for the refugees.

Three Mali ministers and high officials, a guest from Turkey and from Europe met at the charity event, which was sponsored by the Horizon College in Mali, Yardım Zamanı Derneği of Mali and Yardım Zamanı of Europe aid organizations. While he was the Minister of Education, Diarra said he had the opportunity to work together with the Horizon College Turkey school, and on this occasion he had a chance to know more about the influential Islamic preacher Fethullah Gülen.