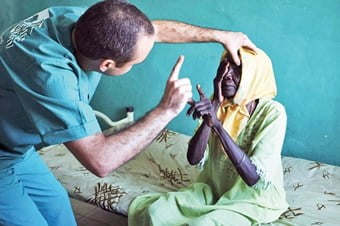 Kimse Yok Mu Foundation is making plans to perform cataract surgery on 2,400 Nepalis. Nepal Ministry of Health is in support of this project as well.

Kimse Yok Mu Foundation continues to extend a helping hand to Nepal. With the support of Nepal’s Ministry of Health, KYM is getting ready to treat 2,400 Nepalis who are suffering from cataracts. The patients are of limited means and the surgeries performed will be free of charge. Having treated thousands of Africans through its Cataract Project, KYM is now reaching out to the Far Eastern country of Nepal. Nepal Minister of Health Khaja Raj Adhikari and Secretary for the Ministry of Health Dr. Praveen Mishra met with Nepal Turkish Schools Principal Halil Çınar and Vice Principal Olcay Şenol on the subject of Kimse Yok Mu Foundation’s help to the Nepali people.

Distance does not Stop One From Helping

During the meeting, Nepal Minister of Health Khaga Raj Adhikari declared that they were ready to supoort the project in any way they could. After noting the fact that thousands of kilometers were not an obstacle in helping others, Minister Adhikari regarded the help coming from Turkey as truly noteworthy.

In past years, the Kimse Yok Mu Foundation had also set iftar tables for 1,250 Nepalis and had distibuted 410 food packages to families in need.

Published [in Turkish] on Bugün