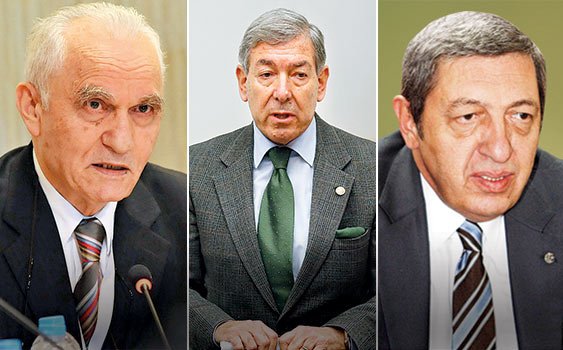 A number of retired ambassadors have criticized Prime Minister Recep Tayyip Erdoğan and Interior Minister Efkan Ala’s calls on ambassadors serving abroad to “tell the truth” to their foreign addressees about a corruption scandal that has implicated former government ministers, saying the order is neither appropriate nor reasonable.

“Will ambassadors tell their foreign colleagues that a corruption investigation started, which includes some members of the government, and that the government found the solution in changing a number of bodies such as the HSYK [Supreme Board of Judges and Prosecutors] and judicial police regulations?” asked former ambassador Deniz Bölükbaşı. He said that even if ambassadors explain the course of events to their colleagues abroad, their foreign counterparts will once again see a pathetic picture of Turkish foreign policy.

Speaking at the annual gathering of ambassadors in Ankara on Wednesday, Erdoğan was the first to describe the corruption investigation involving former government ministers as nothing but a “treacherous plot” to sabotage Turkey’s international standing, as he ordered Turkish ambassadors serving abroad to “tell the truth” to their foreign interlocutors.

Without naming it openly, Erdoğan has accused the Hizmet movement led by Turkish Islamic scholar Fethullah Gülen and “its foreign collaborators” of attempting to overthrow his government through a “judicial coup” ever since the corruption probe that shook his government became public on Dec. 17, 2013 with a wave of detentions.

At the same conference the next day, Interior Minister Ala told ambassadors serving abroad: “We cannot allow black propaganda to be spread at a time when things we do not deserve are taking place. One of the best ways to eliminate this is information, providing correct information to the international community.”

Yaşar Yakış, a former foreign minister of Turkey, said the government can give any kind of written or oral instruction to its ambassadors. “However, some issues can put Turkey in a difficult situation in the international arena,” he said.

Ala also stressed that all issues are of interest to ambassadors, saying: “If it interests Turkey, the whole responsibility for this abroad is yours and domestically with the governors . … There is no area that does not concern you. You cannot say, ‘This is not my business,’ on any issue that you are informed about.”

Another retired ambassador, Osman Korutürk, told Today’s Zaman that the order to these ambassadors is “against the law” because ambassadors are not supposed to be the voice of any political party. “It is not possible to pursue these issues through ambassadors,” he said.

During his speech, Erdoğan defended the measures that have been taken since the corruption probe went public, saying they are not an intervention into the judiciary but a step designed to fight an “illegal organization” within the judiciary, apparently referring to the Hizmet movement. “The real face of this organization must definitely be shown abroad,” he said.

Erdoğan and Ala’s remarks during their speeches to ambassadors are reminiscent of a controversial National Security Council (MGK) document indicating that the ruling Justice and Development Party (AK Party) agreed to a planned crackdown on the Hizmet movement in 2004.

The Taraf daily published a document in December 2013 prepared by the MGK on Aug. 25, 2004, persuading the government to implement a series of measures to curb the activities of the Hizmet movement. It advises the government to adopt legal measures that would impose harsh penalties on Hizmet-affiliated institutions.