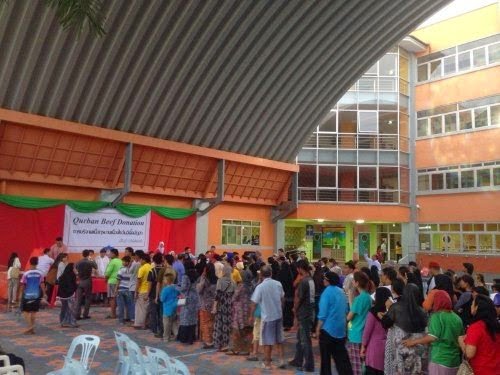 The Buddhist-majority country is home to over eight million Muslims. Regardless of their religions, every needy Thai who came to the distribution facility benefited from the donations.

Marmara Solidarity Foundation’s chair Zeki Parilti spoke on their eid efforts in the country. “We slaughtered sacrifice animals in 12 different locations and gave away their meat to thousands in 10 locations. We partnered with local public authorities to determine those in need. We’ll carry on with our efforts to be able to reach out to more people next year.”

Sai Mai district governor Suvit Ratsameepat was present at the distribution event at Siriwat Wittaya School in the capital Bangkok. Ratsameepat expressed his thanks for the donations. Similarly, the imam to Rahmetul Islam Mosque Davud bin Osman expressed his thanks to the donors in Turkey and said the donations will cheer up hundreds of family members.