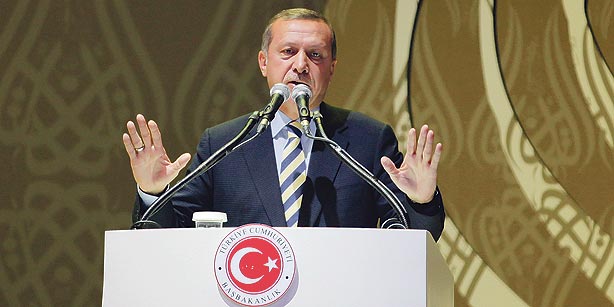 Embattled by massive corruption allegations at home, the ruling Justice and Development Party (AK Party) has been trying to distract the public’s attention from allegations of corruption by holding an imagined “parallel structure” responsible for anything making the government look bad.

Following a corruption probe that broke out on Dec. 17, the government and Prime Minister Recep Tayyip Erdoğan have put great efforts into creating an enemy they are calling the “parallel structure.” They are doing this to avoid accountability for their corrupt actions and to place the blame on a elusive scapegoat.

During his election campaign, Erdoğan continued to indirectly target the Hizmet movement, which was inspired by the teachings of Islamic scholar Fethullah Gülen, by implying it is the “parallel structure.” He used this rhetoric to rally people around himself and create the impression that there is a threat against the national security of the country.

Following a decision by the Constitutional Court to stop a ban on Twitter that was made by the government, Erdoğan reportedly told a group of journalists in a private meeting that one gets the impression that there might be members of the parallel structure within the Constitutional Court. It is safe to argue that the government believes there is a parallel structure behind every decision or act that the ruling party does not approve of, no matter how universal they are.

Erdoğan’s Cabinet members have not been shy about putting on blinders and participating in the prime minister’s defamation of the Hizmet movement. They make claims that a parallel structure exists even though they have no evidence of one. Foreign Minister Ahmet Davutoğlu said on Thursday that he believed with great “conviction” that a parallel structure is responsible for the illegal tapping of a top-secret meeting at his ministry on a possible intervention in Syria. However, he did note that he has no concrete evidence to support his conviction.

Over the weekend, the mouthpiece media outlets of the governments, which were allegedly financed by a money pool that pro-government businessmen were forced to establish, accused the Hizmet movement of being behind the Armenian genocide bill that passed in the US Senate Committee. They based their allegations on a photo of Faruk Taban — chairman of the Turkic American Alliance (TAA), a Washington-based civil society institution that is affiliated with the Hizmet movement — who can be seen with a senator who had signed the bill. Sen. Robert Menendez attended a convention last week organized by the TAA. A statement made by Taban said the discomfort of Turkey and Azerbaijan about the aforementioned bill has been expressed to Menendez. TAA said efforts to create the impression that the Hizmet movement is working against the interests of Turkey is part of a “perception operation.”

Saying that the newly appointed Turkish ambassador to Washington has not started his tenure yet, Taban said that the TAA has remained alone in its lobbying activities to prevent the bill.

In yet another example of finding a scapegoat for its actions, AK Party Deputy Chairman Süleyman Soylu implied that members of a parallel structure are on the Supreme Election Board (YSK) and that this why the AK Party’s objections to some election results have not been handled fairly. In reality, the YSK has accepted most of the governing party’s objections and has rejected appeals for a recount in the capital Ankara by the main opposition Republican’s People Party (CHP).

The government’s distorted presentations of reality have gone so far as to accuse a European Parliament (EP) member of being bought by the “parallel structure.”

EU controlled by parallel state according to minister

In a surprising remark on April 2, EU Minister Mevlüt Çavuşoğlu said that if the EU were to freeze accession negotiations with Turkey, this would demonstrate that the EU is controlled by the so-called parallel structure.

Responding to a question from a reporter at the Cihan news agency, which is affiliated with the Hizmet movement, Çavuşoğlu replied: “You play the song and dance to it. You have done this before. You have made some Liberal deputies [in the European Parliament] that you had a prior arrangement with say these things. You made [EP Deputy] Andrew Duff say it,” he said, addressing members of the “parallel structure.”

“Turk EU Minister @MevlutCavusoglu accuses me of being bought by Gülen. Doubtless he can substantiate that later,” Duff tweeted during discussions at the Turkey-EU Joint Parliamentary Committee meeting. He said Çavuşoğlu should either substantiate his claim or apologize. Çavuşoğlu refused to apologize, and responded by saying his statement had been “misrepresented.” He advised Duff to change his sources for more reliable ones and to not give credit to the “liars” who reported his remarks. Duff said on Friday that he is not satisfied with Çavuşoğlu’s reassurances that he did not accuse him of “being bought” by the Hizmet movement.

Last week, a first in the nation’s history, a university president began wearing the Islamic headscarf at Diyarbakır’s Dicle University. Although Professor Ayşegül Jale Saraç said that it was her personal religious choice to don the headscarf, an AK Party deputy from Diyarbakır, Cuma İçten accused the university administration of acting under the influence of the “parallel structure.”

Due to its “fears” of the “parallel structure,” the government has reshuffled and/or purged thousands of police officers since Dec. 17. Concerned about a possible attack from members of the police force, Minister of Interior Efkan Ala attended National Police Day celebrations on April 10 with over 20 bodyguards. Saygı Öztürk, a journalist from the critical populist Sözcü daily, wrote on Sunday that the minister has lost trust for his own police.

Ala said that 150 police officers have been dismissed as part of a wiretapping investigation. As a result of the government’s distorted presentation of the Hizmet movement, actions that are against the rule of law are on the rise, stepping up criticisms from EU officials about Turkey.