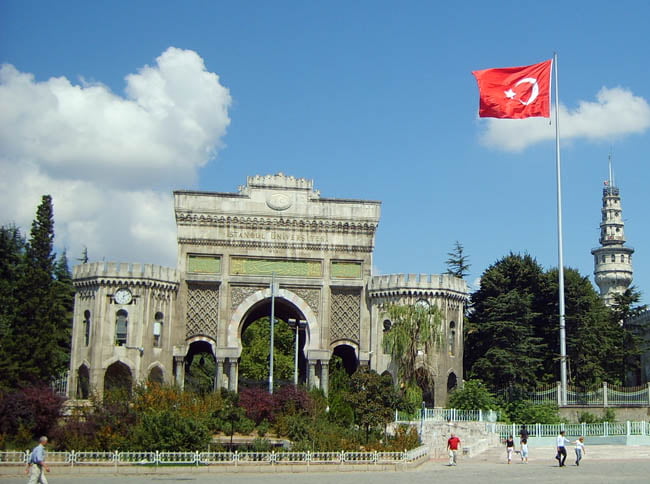 The main entrance to İstanbul University.

Similar to the practices of the Feb. 28, 1997 military coup when pious people were subjected to discrimination in all fields of life including universities, individuals and organizations who are thought to be affiliated with the Hizmet movement are being subjected to extensive discrimination today.

The Feb. 28 coup, which resulted in the military’s toppling of the then-coalition government led by a now-defunct conservative party on the grounds that there was rising religious fundamentalism in the country, introduced an array of bans for pious people, with the headscarf ban being the most widely practiced one. “Persuasion rooms” were established at the İstanbul University to convince headscarf-wearing students to take off their headscarves in the period leading up to the Feb. 28 coup.

The AK Party government launched a battle against the Hizmet movement late last year following the exposure of a graft and bribery probe in which senior government members have been implicated. Accusing the movement of having orchestrated the probe, the government has begun an overall war against Hizmet-affiliated schools, banks, media organs as well as individuals.

Fatih University graduates who wanted to do post-graduate study at the law faculty of İstanbul University have been given unusually low grades in their interviews as if they have been punished for having studied at an Hizmet-affiliated university.

The list of students who won places after the post-graduate exams held on July 13-14, which included written exams and interviews, held by the İstanbul University, was posted on the official website of the Social Sciences Institute of the university on Wednesday. Only one out of the 23 graduates of Fatih University who took the exam was admitted to the university, despite the fact that most of these students scored higher points than their rivals.

Moreover, some students from Fatih University said they were asked irrelevant and discriminatory questions by the jury committee, which included the dean of the law faculty, Professor Adem Sözüer, during the interviews.

“Why did you choose to study at Fatih University five years ago instead of here?”, “Why did you act on someone else’s suggestions,” “Was your family’s financial situation so bad that you went to Fatih to get a scholarship?” were some of the questions allegedly asked by Sözüer to Fatih graduates.

Efforts by Today’s Zaman to reach officials from İstanbul University to ask about the discrimination claims remained futile as no official was available to speak to the paper on Thursday.

Two Fatih University graduates, who requested to be named as N. and A., said despite their high grades in the exams, they were asked strange questions during the interviews. The students said the jury members had a meeting following the interviews after which they told the Fatih graduates who took the university’s post-graduate exams to re-apply to the university in December.

“Since you have poor grades, you cannot be admitted. If you have been admitted by other universities, their written exams must have been very easy,” the jury members allegedly told students.

The meeting, which jury members had outside of their schedule, was held when Fatih University graduates were interviewed, according to the students.

Another Fatih graduate, E., who was among the top students in the university entrance examination, is another victim of the alleged discrimination at İstanbul University. Although E. scored very high marks in the Academic Personnel and Postgraduate Education Exam (ALES) and the Foreign Language Examination (YDS), which also influences a student’s overall score, the student was given lower points than expected. If E. had received 10 points out of 100 in the interview and the university’s written exam, it would be sufficient for the student to be directly admitted to the university. E. was given zero points in both the interview and the written exam. E. was eventually admitted to the university from the waiting list.

“They [committee members] talked to me for only a couple of minutes while they interviewed other students for more than 15 minutes. I was told that I was rejected despite my high scores and they suggested that I re-apply in December in order to be accepted,” E. told Today’s Zaman, before his name appeared on the waiting list.

The highest point given to Fatih graduates in the interviews was 20 out of 100.

Another Fatih University graduate student who also declined to be named due to the “complicated” agenda of the country said she believes to have been treated differently by the İstanbul University during the interview. “My graduation grade is great. It is almost 99 out of 100. My ALES score is also amazing. I do not understand how I got only ‘five’ points out of 100 at the interview. I am telling you, I did not get five points, I was given it. There is no other explanation for this. In addition, the jurists asked me many meaningless questions when they saw that I graduated from Fatih University.”

O.K., another graduate student from the department of political science, got 97.2 out of 100 for his graduation grade, but was given only 20 points by the jury committee. Consequently, he was eliminated due to his average score of 70.

In remarks to Today’s Zaman, C.T., another student, said that although his graduation grade is higher than 83.90 out of 100, he was given only 20 in the interview.

“There was an applicant who applied to the political science and international relations department. When I looked at the results, I saw her name among the winners of places. Although her other scores were lower than mine, she was given a high point in the interview. She got only 50 in the language exam. What is more, her graduation grade was quite lower than mine: 73.2. How come she got in and I didn’t? There is something going on here,” C.T. said.

A.N., the most successful student of the faculty of law in the 2013-2014 academic year, is another victim of the discriminatory treatment against Fatih University students. A.N applied to Istanbul University’s masters program relying on her graduation grade of 98 and 91 points from the ALES exam. She was given only five points in the interview and eliminated for no reason.

The discriminatory treatment has been met with huge disappointment by other students of the university.

“I am surprised when I see this kind of discrimination in Turkey against Fatih University graduates where the educational quality is so high. Treating students according to their ideologies is a feature of third-world countries. I thought Turkey was not one of them,” said Uriel.