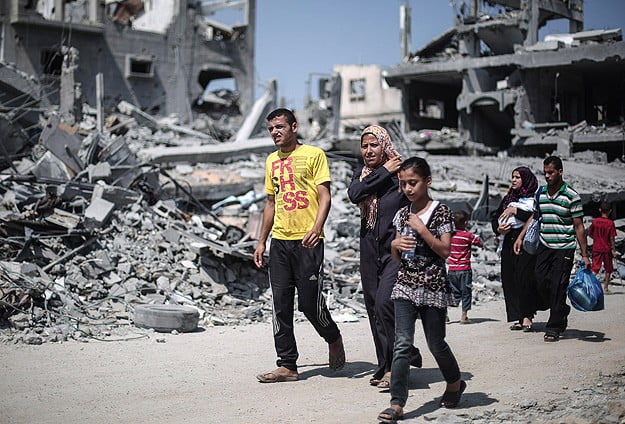 Talking to Today’s Zaman, Kimse Yok Mu Jerusalem representative Harun Tokak said there are extremely poor people in the West Bank due to the high rate of unemployment, with little industry present in Palestine.

Commenting on the government’s decision to curb Kimse Yok Mu’s activities, Tokak says he really has difficulty comprehending the rationale behind the decision, because it will mainly hurt the recipients of aid, not only in Palestine but around the world.

Tokak said Palestine receives aid from various parts of the world, but the donations are not usually sustainable. “For example, there are hospitals built through donations, but since operational costs are not covered, the hospitals do not function,” he explained. He said he is trying to organize doctors from Turkey to spend their annual vacations in Palestine to help patients here. As Tokak mentioned, one hospital in East Jerusalem currently faces the risk of closure due to a lack of staff.

Tokak says their target is to reach 50,000 households in Palestine next year, saying that thanks to their cooperation with a local charity, they have access to a list of people in need.

Stating that no fraud or wrongdoing was discovered during months-long inspections of Kimse Yok Mu, Tokak says the attempt to hinder the charity is an “assassination of prestige.”

“I cannot understand the reasoning of the government and wonder how those who signed the decision on Kimse Yok Mu will be able to sleep in peace, because they are preventing help from reaching the disadvantaged of the world,” Tokak further commented. According to him, the people in Palestine and Africa are fully aware of the volunteer work of Kimse Yok Mu.

Tokak argued that despite the government’s attempt to harm Kimse Yok Mu, the people embrace their cause and have increased their donations, although there are some who have been influenced by the government smear campaign. Tokak likens the campaign to what has been happening to Bank Asya, a bank founded by sympathizers of the Hizmet movement, which has become the direct target of President Recep Tayyip Erdoğan. Although Erdoğan announced the bank to be bankrupt, thanks to a growing number of deposits from regular citizens, the bank remains strong.

Turkish charity organization Kimse Yok Mu has organized an international cartoon competition titled “refugees” in order to raise awareness of the difficulties facing migrants who fled their homelands and set out on dangerous journeys to Europe.