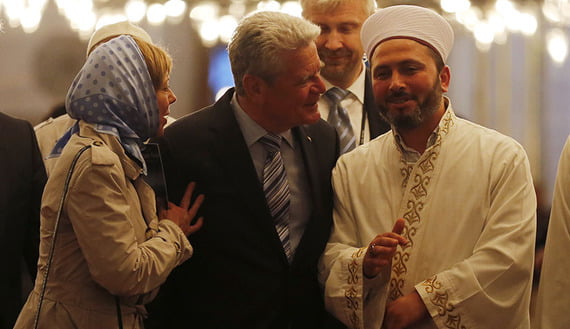 On April 28–29, German President Joachim Gauck paid an official visit to Turkey that became more controversial than expected. The reason is that Gauck, who followed the usual diplomatic routines, criticized the Turkish government on four sensitive issues: its recent bans on social media, tensions with the Constitutional Court, interference with the judiciary and pressure on the media. In response, Prime Minister Recep Tayyip Erdogan slammed Gauck, accusing him of “telling lies.” He also criticized him for allegedly “supporting Turkish atheists in Germany” and acting like “he is still a pastor,” leaving the connection between atheism and pastorhood murky.

Certain voices in the Turkish media also criticized the German president for his apparently unwelcomed remarks. The most creative punch came from the tabloid Takvim, an unwavering supporter of the government. In a banner headline, Takvim bashed Gauck, bestowing on him the surprising honorific “The imam of Germany!” The logic was that Gauck, being such an outspoken critic of the Turkish government, had acted as if he were a key figure in the Fethullah Gulen movement, the former Erdogan ally that the prime minister recently redefined as public enemy No. 1. “The German president acted like the imam of Germany,” Takvim explained, “by supporting the prosecutors and the police of the [Gulen] community.”

It should be noted that Takvim is not a paper that strives to be taken seriously. A year ago, it published a fake and scandalous interview with CNN’s Christiane Amanpour. Its headlines are often feverish and over the top. Still, the reflex of accusing the German president of serving the Gulen movement simply because of remarks critical toward Erdogan reveals something about the current political paranoia in Turkey.

This paranoia is not the one that suspects that certain members of the Gulen movement have assumed key positions in the judiciary and the police and have used their official powers for their own, if not sectarian, objectives. This was argued for years by various independent writers, such as Ahmet Şık, who was notoriously detained for a year (2011–2012) after writing a book on this very topic, and former police chief Hanefi Avci, who is still in prison for making hard-to-believe accusations. It is quite plausible to imagine that the prosecutors and the police who launched the corruption investigation on Dec. 17, condemned by Erdogan as a “coup attempt,” could be members of the movement by looking at the support they have received from affiliated media.

Rather, the current paranoia is to think that every obstacle and instance of opposition that Erdogan faces is a part of a grand conspiracy cooked up by the Gulen movement and the mythical powers behind it, such as the CIA and “Zionism.” This has become the dominant mode of thinking within some pro-Erdogan circles and has been constantly promoted through traditional and social media.

Erdogan himself recently exhibited a remarkable example of this line of thinking. In a public speech in which he lashed out against the Constitutional Court — for its “unpatriotic decisions,” such as lifting the Twitter ban — Erdogan found the real culprit to be the “parallel structure.” He has used the terms “parallel structure” and “parallel state” since the corruption investigation broke to refer to the alleged Gulenist network within the police and the judiciary. “I said it yesterday and I repeat it today,” Erdogan stated, “they [the parallel structure] listened to the head and the members of the Constitutional Court.” What he implies is that the court is being blackmailed by the parallel structure, which explains its rulings against the government.

Then Erdogan went even further, implicitly accusing the top judge, Hasim Kilic, a man with an impeccable record, not of being a victim, but a collaborator of the parallel structure. The prime minister asserted, “Those who ask us to document or ask where this parallel structure is … are either part of parallel [structure] or protecting this structure to get something in return.” The fact is that there is no evidence to suggest that Kilic or any other member of the Constitutional Court belongs to the Gulen movement. In fact, as columnist Ali Bayramoglu noted, Kilic himself alluded in a recent speech to the problem of a “new tutelage within the judiciary.” So, the only basis for Kilic’s link to the parallel state seems to be his decisions and statements that have displeased Erdogan and the theory that this could not be possible without a conspiracy.

Such logic, however, is a danger to any democracy. If mere opposition to the government becomes evidence itself of conspiracy and high treason, then there is nothing preventing the launch of a witch hunt. In other words, if the current mood continues in Turkey, there is a real possibility that lots of innocent, ordinary citizens will suffer from a McCarthyistic purge against the alleged parallel structure. In a bureaucracy, for those who want to climb the ladder the fastest, the best tactic is to accuse one’s competition of being “parallel,” a crime leading to immediate dismissal, even if totally untrue. History has proven, many times, that in a paranoid hunt for the “traitors” of society, libelous informants undoubtedly emerge to be rewarded as “patriots.”

The certified members of the Gulen movement must be protected from McCarthyism as well. If certain prosecutors and police have indeed created a parallel state, using illegal eavesdropping and espionage, they should be prosecuted. The Gulen movement, however, is primarily a civil society organization, consisting of thousands of teachers, academics, journalists, businessmen and charitable workers. A political attack against their legitimate services and institutions would be disastrous for rule of law and societal peace, both of which have already been seriously compromised in Turkey.

One must wonder when Erdogan will decide that the parallel threat has been removed, so Turkey can then normalize. Will it be when there is no longer a corruption investigation or judicial measures that threaten the government? What if the threat never vanishes, and Turkey becomes a “national security state,” constantly fighting ambiguous enemies as it did under the military’s decades-old tutelage? These are concerns any level-headed person in Turkey should have these days. The dominant mood, however, is one of fear, anger and zealousness. It is a zealousness that can demonize a German president overnight as an imam of the parallel state. Imagine how it could demonize ordinary Turks.

18 May 2012 / TODAY’S ZAMAN, İSTANBUL The principles, aims and practices of the Hizmet movement have been discussed at a workshop in South Korea’s leading universities attended by Turkish and South Korean academics and other prominent figures. Organized jointly by the İstanbul Cultural Center in South Korea and Seoul National University’s Research Center for […]