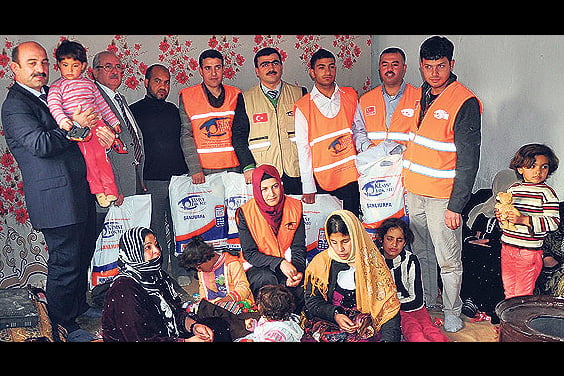 Some of the urgent needs of Syrian refugees who have being sheltering in the southeastern region of Turkey since they fled from the intensifying violence in Syria are being met by the “sister family” project organized by the Kimse Yok Mu (Is Anybody There) charity foundation.

Syrian refugees in Turkey, whose numbers have reached 132,920 according to a written statement recently released by the Prime Ministry’s Disaster and Emergency Management Directorate (AFAD), are struggling with harsh weather conditions with the arrival of winter. Syrian refugees  are suffering from a lack of hot food and clothing and blankets that can protect them against the freezing temperatures.

The Kimse Yok Mu charity project aims to provide food and warm clothes to help the refugees cope with freezing winter conditions. The organization finds a “sister family” for those who want to take care of the basic needs of a Syrian family.

A total of 150 sister families have been found to help Syrian refugee families within the past two weeks in the southeastern provinces of Gaziantep, Şanlıurfa and Kilis, the provinces where the refugees are predominantly sheltered. A total of TL 12.5 million has been collected to provide aid to the refugees from across Turkey within the scope of the charity project.

Kimse Yok Mu Volunteer Unit Coordinator Eyüp Tok told Today’s Zaman that they bring together Turkish families who want to take care of a Syrian family sheltered in a Turkish refugee camp as well as other refugees who are in need of help. “Our Syrian brothers and sisters need urgent help. The standard of living in the refugee camps has deteriorated with the arrival of the winter. Turkish people should look to the people of Medina, who opened their homes to the Prophet Muhammad and his followers when they were forced to migrate from Mecca to Medina in 622 and shared their food and clothes with them, as an example and should help these needy people who have escaped from the ongoing brutality in their country,” said Tok. “I believe people in Turkey will join forces and will fulfill the needs of those people. We have provided aid to hundreds of Syrian families up until now, and we plan to increase the number of families who receive aid thanks to the recently launched sister family project,”

Two sister families — the Turkish Şahin family and the Syrian El-Hassun family — spoke to Today’s Zaman and expressed gratitude for the charity project. Emine El- Hassun said they were forced to escape from Syria to the Akçakale district of Şanlıurfa with her family and have been living in a house they rented with the help of some relatives in Turkey.

Filiz Şahin from Akçakale told Today’s Zaman that she not only provided diapers, powdered milk and toys for the Syrian children but also shared winter clothes from her wardrobe with the family members. Şahin further stated that they have mobilized to help their sister family as much as they can in the winter. “In the beginning, the children of the Syrian sister family were in a bad situation. They were wearing slippers in the freezing cold of winter. When I saw them wearing slippers, I immediately gave them my children’s winter boots. It is very easy make happy a child here because they just want food and clothes, nothing more. We will be together with them as a sister family and provide material aid and spiritual support to them until they return to their country.”