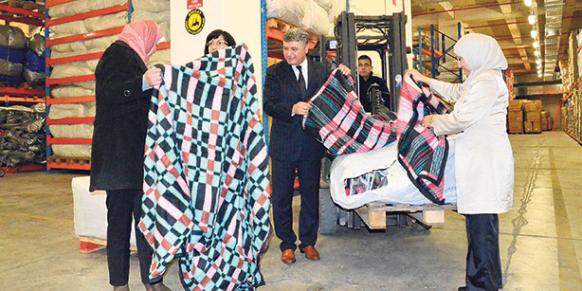 The charity, which has provided aid to Palestinians since 2006, recently donated 10,000 blankets. Another 10,000 were given to Palestinian representatives on Thursday after their arrival in İstanbul. With the winter months approaching, the charity saw the need to aid the thousands of Palestinians who have been living in difficult conditions due to the devastating events in the region.

Officials from the charity have said that this week alone, the blankets that they have given to Palestinian amount to TL 750,000 worth of aid.

According to the charity, it has provided 2,000 packages of food as well as blankets and clothing this week. The first 10,000 blankets have already been given to residents of the Gaza Strip, while the rest of the blankets were given to Palestinian officials in İstanbul on Thursday.

Wafa Hemeid, the wife of the mayor of the city of Bethlehem in the West Bank, the West Bank’s Social Policy Committee coordinator Najla Miqdad and businesswoman Laila Asfoura accepted the aid given by the charity with pleasure. “What really left a mark with me is that Kimse Yok Mu reacts so quickly. This really pleases us. We told the charity that the winter season is approaching and that people will begin to get cold. We also told them that we were in need of blankets and before we even came to İstanbul we learned that they had already sent aid to Gaza,” Miqdad told Today’s Zaman.

Kimse Yok Mu foreign aid coordinator Yusuf Yıldırım, who supervises the aid that goes to the Palestinian regions, told Today’s Zaman: “Right now our aid is continuing in Gaza. We received the request for help on Friday and on Monday we began to distribute the aid packages. The remaining 10,000 blankets will arrive in the West Bank in the cities of Hebron and Bethlehem, and public officials have come here to collect them. In total, TL 700,000-750,000 worth of aid has arrived in Palestine this week. We praise this and the aid to the area will continue.”

The reason that the charity is able to provide aid to those in unstable regions is due to the fact that government has lifted constraints that were imposed on the charity in October.

Kimse Yok Mu has been under pressure in recent months and has received threats from Turkish President Recep Tayyip Erdoğan. On Sept. 30, the charity — which is affiliated with the faith-based Hizmet movement — had its right to collect charitable donations abruptly rescinded by the Cabinet. The decision came into effect, according to the Twitter account of Kimse Yok Mu President İsmail Cingöz, just before Eid al-Adha, a time when many practicing Muslims make donations to charity.

Erdoğan has also made remarks to African countries, warning them against “threats” from “dangerous structures that look like nongovernmental organizations or education volunteers.” These comments were directed at the Hizmet movement, which follows the teachings of Islamic scholar Fetullah Gülen. In the wake of a major corruption scandal which erupted following police investigations last year, the government has waged a smear campaign against Hizmet, which it accuses of masterminding the corruption probes to bring down the goverment.

After much controversy and outrage at the removal of a charity’s ability to aid those in need, the 10th Chamber of the Council of State announced on Nov. 25 that the Cabinet’s decision in October that removed Kimse Yok Mu’s right to collect donations was against the law.

The Turkish Foreign Ministry did not renew honorary consuls’ certificates due to their affiliation with the Hizmet movement, Turkish media reported.