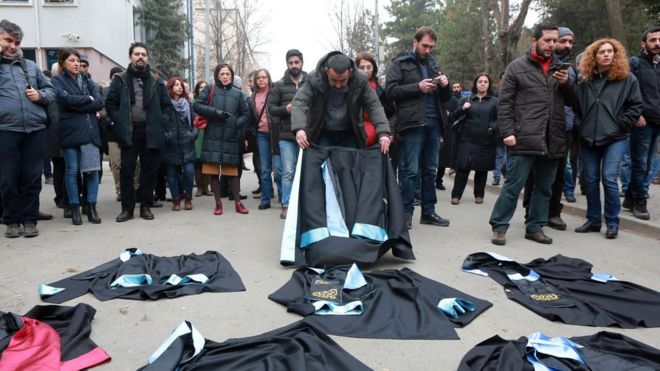 On July 20, 2016, following the failed coup d’état five days earlier, Turkish President Recep Tayip Erdoğan declared a state of emergency. It gave him extraordinary powers in cracking down on Turkish citizens suspected of having ties with the organization of Fethullah Gülen, who Erdoğan has accused of orchestrating the coup.

Gülen, 76, is a former Turkish imam living in exile in the United States since 1999. He created a kind of a shadow government in Turkey by planting his followers in the highest echelons of the Turkish military, judiciary, police, media, and institutes of education.

The committees recommend termination if the accused satisfies any three of eight specific criteria. They include an account in the Gülen-linked Aysa Bank, placing children in Gülen-linked schools, participating in fund-raising events, and having the encryption application BYLOCK (allegedly used by the Gülen organization) on any of their electronic devices. The committee’s recommendation goes to the university rector, who makes the final decision whether to fire the faculty member and whether to report the findings of the committee to the intelligence services.

During the last year, close to 5,000 academics and college administrators lost their jobs. Hundreds have been arrested and jailed, awaiting outcomes of lengthy investigations and trials. Those that have been expelled are prohibited from having government jobs and are in a desperate search for the source of income.

Internationally-renown Turkish physicist Nihat Berker, who spent 25 years at the Massachusetts Institute of Technology before returning to Turkey, chose to step down from his position of rector of Sabanci University in Istanbul rather than to comply with the government request.

Rector of the Middle Eastern Technical University in Ankara, Mustafa Verşan Kök, has informed the Council of Higher Education that he will not be presiding over investigations of METU professors. He requested that all investigative activities be delegated to the police and intelligence services.

Erdoğan has repeatedly hinted towards the American hand in the attempted coup d’état. Among academics imprisoned in Turkey is a U.S. citizen, NASA scientist, Serkan Gölge, age 37. In July 2016, he was on a family visit in the Hatay province when neighbors of the relatives reported him to the police.

The first court hearing took place on April 17, 2017. Gölge was accused of membership in Gülen’s organization. He denied all charges. Two other hearings in May and July ended up in a similar fashion.

While in prison, Gölge developed kidney stones and was hospitalized for three days. A request by his attorney to release him on bail was denied by the judge. According to the attorney, the interrogators repeatedly asked Gölge whether he would be willing to return to the U.S. as a spy for Turkey in exchange for freedom.

So far the Trump administration has been silent about the egregious violations of human rights of Turkish citizens by Erdoğan’s government.

Secretary of State Rex Tillerson, on his recent visit to Turkey, praised the Turkish people for defending democracy against an attempted military coup — regrettably, Tillerson failed to criticize Turkish government for the witch hunt that followed.

Eugene M. Chudnovsky is a contributor to the Washington Examiner’s Beltway Confidential blog. He is a distinguished professor of Physics at the City University of New York and co-chair of the Committee of Concerned Scientists.

If you would like to write an op-ed for the Washington Examiner, please read ourguidelines on submissions here.