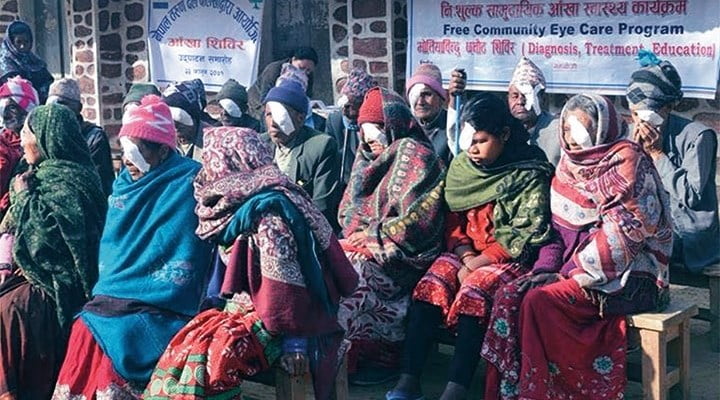 In addition to its efforts in Africa, Kimse Yok Mu reached out for help to Nepal, the roof of the world, too. Kimse Yok Mu local affiliate Nepal-Turkish Foundation performed 2,000 cataract surgeries in the country where the disease is remarkably widespread due to sunlight at high angle.

Nepalese deputy-prime minister and minister of interior affairs Bam Dev Gautam presented a certificate of appreciation to the KYM officials. “We are grateful for the donations from Turkey,” Gautam said.

Nepalese doctors, KYM and Nepal-Turkish Foundation volunteers sometimes had to walk up to eight hours to far-flung villages of the country.

Nepal-Turkish Foundation official Olcay Senol spoke on their efforts in the cities Gorkha, Pokhara, Nepalgani and Biratnagar. “As the country is located on very high altitudes, people are exposed to sun light at a very high angle, which results in countless cataract patients. The disease is actually an easily curable one but it’s still the reason behind many blind eyes.”

“We’ve reached out all the way to villages. We are working in cooperation with 10 Nepalese doctors. They are in charge of the surgeries and we carry the equipment. Surgeries are taking place at hygienic spots we could find. We’ve done 2,000 surgeries so far and target 5,000. The local people are very happy to see us. They pray for Turkey in return.”

KYM has been offering surgeries in may parts of the African continent including Sudan, Chad, Cameron, Mali, Republic of Central Africa, and Republic of the Congo, Burkina Faso, Pakistan, Guinea and Niger. Total number of the surgeries performed in 2014 is 30,180.

The Armed Forces of the Philippines have recognized the Filipino-Turkish Tolerance School in Zamboanga for their contribution to peace in the region. The award came after the Turkish high school in the Philippines gave support to people suffering from internal conflict in Mindanao, one of the islands of the Philippines, and provided 38,000 homeless people with humanitarian assistance.