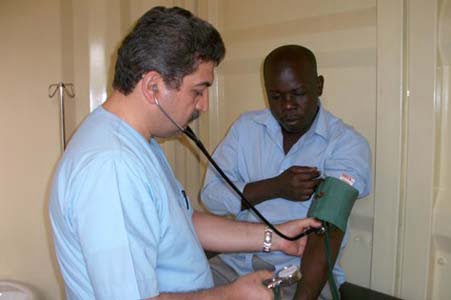 A conference titled “Multifaceted Human Nature and Its Relation with Health” was held to commemorate Medicine Festival on March 14 with various health professionals and provincial officials in the province Malatya, Turkey.

In his speech, a GUSAF member urologist Dr. Necdet Kizilkaya announced that a 33-bed hospital financed by Turkish NGOs is under construction in Jinja, in the eastern African country Uganda. Kizilkaya revealed that 13 departments staffed by 50 professionals will be available at the hospital. Kizilkaya briefed on the project saying “Just like in any other African country, medication, doctors and supporting healthcare staff are extremely needed in Uganda too. We, as a team of doctors, have been to Republic of Democratic Congo for a medical screening earlier in 2007. We split into two groups one of which, including me, went to Kasai state. It was a disease-ridden and seriously disadvantaged region. We unexpectedly met an American woman surgeon there. We had assumed we were the first white men to provide medical service to the region. Now we are building a 33 bed hospital on 21.000 ft² area. It will be serving with 13 departments staffed by 50 professionals. The hospital will offer medical care in departments including internal medicine, pediatrics, gynecology, general surgery, urology and ophthalmology. It will be equipped with two operating theatres, a delivery room, 26-bed patient service, 4-bed emergency, labs, and radiology and pharmacy services. The hospital, serving daily to about 500 patients, will be initially operated by volunteer doctors and supporting health professionals. The construction has been largely completed and the hospital is scheduled to be launched this year. The hospital initiated as a part of the project will contribute considerably to healthcare system of Jinja.”

Islamabad—A Turkish NGO, Kimse Yok Mu Solidarity and Aid Association headquartered at Istanbul, has built housing units to accommodate 296 flood-affected families in Punjab. It is a grand brotherly gesture from the Turkish people towards alleviating the housing difficulties of the flood affectees of Pakistan. Today, Sep. 13, 2013, in the inauguration ceremony of this […]

Kimse Yok Mu does not slow down in providing aid to the refugees who have settled in the city of Kilis, Turkey because of the civil war in Syria. Kimse Yok Mu distributes meals, including lunch and dinner to 1000 people, and has provided aid to 14,000 refugees living in the camps in the cities […]