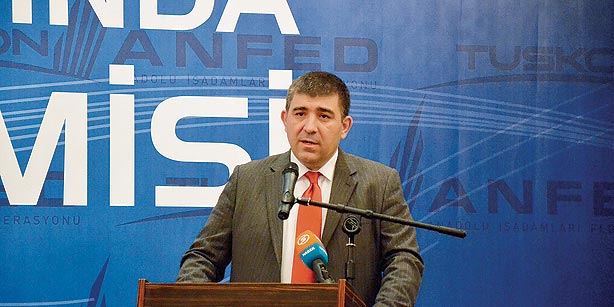 Earlier in December, a voice recording surfaced on social media in which Turkish Islamic scholar Fethullah Gülen and TUSKON Secretary-General Mustafa Günay discuss business opportunities in Uganda. Günay also mentioned gifts sent from Uganda, which included pineapples. Günay also consulted Gülen about a tender for a refinery in that country, saying that a Turkish company — Koç Holding, if possible — should enter it.

For days after, government officials, including Prime Minister Recep Tayyip Erdoğan, publicly mocked the pineapple remarks. Erdoğan said, “We will not allow a pineapple republic in Turkey,” in reference to the phone conversation between Günay and Gülen, which had been illegally wiretapped.

In reaction to some who alleged that “pineapple” was a codeword for diamonds, Koç Holding CEO Mustafa Koç said those statements were untrue. Following this, TUSKON said it had launched legal complaints about the smear campaign. TUSKON said the pineapple issue was part of the Turkish culture of giving gifts, adding that the organization objected to others making fun of the issue.

“We have filed a total of 60 lawsuits against the alleged accusations, all due to the same phone wiretap, and the courts found TUSKON right in all of them. …we will receive compensation following our claim for damages and this will be allocated to the construction of a new orphanage in Uganda,” Günay told reporters in İstanbul on Tuesday. He declined to mention the size of the compensation. Günay said it was his job description is to help Turkish businessmen, regardless of whether they are members of his business organization or not, to build commercial relations with Uganda or any other country.

TUSKON earlier stated that it was saddening to see Günay’s efforts to help Turkish companies win an oil refinery tender become the subject of unrelated debates, instead of being appreciated.

“They do not extract diamonds in Uganda; they don’t even have gold. … I do not know where these people came up with such unrealistic claims,” Günay said, adding that TUSKON will work even harder to cement Turkish ties with Uganda.