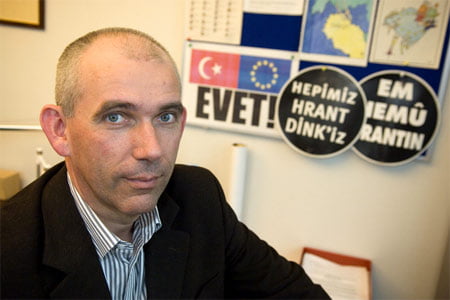 In Turkey, it is very easy to learn about all the different points of view. Columnists and editors from all newspapers and TV channels have come forward with their often very outspoken assessments. In Europe and the US it’s much harder for people to get a real good picture of the significance of the Sledgehammer case (Military coup attempt in Turkey, which was planned in 2003).

Since the verdict in the Sledgehammer trial last Friday, the public relations war on how to interpret the ruling is in full swing. Is it, as this paper has been saying, a historic step in Turkey’s democratization process? Should it be seen as a miscarriage of justice, based on fake documents and inspired by feelings of vengeance, as other media outlets want us to believe? Or should we be careful not to jump to conclusions and wait until the judges have published their arguments?

In Turkey, it is very easy to learn about all the different points of view. Columnists and editors from all newspapers and TV channels have come forward with their often very outspoken assessments.

In Europe and the US it’s much harder for people to get a real good picture of the significance of the Sledgehammer case. Correspondents wrote and spoke about it briefly and, depending on their own analysis, mainly stressed the facts or went into the speculations and discussions surrounding the trial. The big problem is that 99 percent of the Europeans and Americans lack the basic background information to be able to make sense of this court case. Most only vaguely remember the history of previous coups in Turkey, and nobody has heard of Çetin Doğan, one of the main suspects in this case, whom many Turks remember as one of the architects of the Feb. 28, 1997 post-modern coup. Only a few informed Westerners fully understand the ideological mindset of the old guard in the Turkish army that considered intervening in politics not only as a right but as an obligation.

It should not come as a surprise that, given this absence of informed news consumers, it is relatively easy to manipulate public opinion in Europe and the US. That is exactly what has been happening since the start of the trial in 2010. As Emre Uslu pointedly concluded in his column, the defendants and their spokespersons have not done a good enough job in defending their clients in court, but they have done an excellent job in convincing the Western media and public opinion that the Sledgehammer case is part of the battle between Islamists and secularists in Turkey and that the secular and democratic character of the republic is under threat.

The most tireless and committed advocate of one of the key suspects was and is Dani Rodrik, Çetin Doğan’s son-in-law and a respected Harvard University professor with a huge network in Western media and among opinion leaders. Since the start of the trial, Rodrik has written numerous articles in which he has kept on hammering one idea into his readers’ heads: This coup plot is fabricated, and everybody who claims otherwise does not know the facts or has fallen into the trap set by the Gülen movement, the biggest supporter of this and other trials. His main argument: The CDs that contain all of the Sledgehammer documents are fake and were produced later. One has to give it to Rodrik: He has managed to convince many in Washington and Brussels that something was fundamentally wrong with this trial. During the last year, for instance, the perception among members of the European Parliament markedly changed after Rodrik and other family members of the defendants paid them a visit.

And then there was Hilmi Özkök. The former chief of General Staff at the time of the disputed 2003 seminar who first testified and last weekend spoke out on the ruling of the court. He acknowledged that he was informed about the meeting and that he warned the generals involved that the seminar, which according to Doğan and Rodrik was no more than a get-together to test the army’s plans against a particular contingency scenario, “went beyond its purpose.” Knowing the mindset of his subordinates, it was clear to Özkök that these were not just war games but serious plans to intimidate the new Justice and Development Party (AK Party) government that most officers deeply distrusted or despised. After the trial ended, Özkök expressed his sadness and sorrow about the fate of his former colleagues but stated that the trial was not unfair. He also said: “I wish no such thing had ever happened. But it happened.”

My question to Rodrik and the people that trust his judgment: Is Özkök a closet Gülenist or has he put his finger on the sore spot? For me the heart of the matter is this: There were several high ranking officers in 2003 who were looking for approval for their coup plans but did not get it. Forget about manipulated CDs and procedural mistakes. They will be dealt with in the appeal procedure and, if necessary, corrected. If Rodrik’s allegations are true, even partly, the responsible prosecutors and judges should bear the brunt for their misbehavior. But that does not mean that Çetin Doğan and others did not try to undermine a democratically elected government in 2003. That happened, and those responsible should be punished.