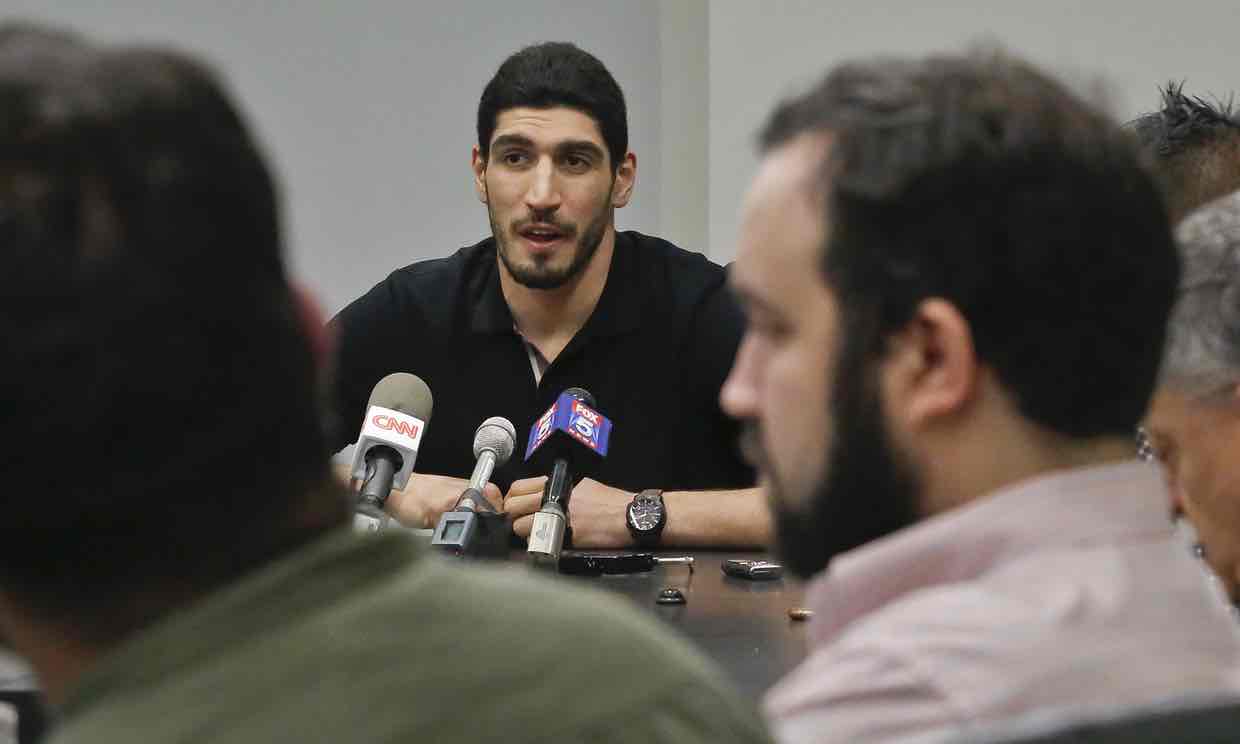 Thunder center Enes Kanter speaks about his detention at a Romanian airport at press conference on Monday in New York. Photograph: Bebeto Matthews/AP

Oklahoma City Thunder center Enes Kanter expressed his desire to become a US citizen and underscored a previous claim that Turkish president Recep Tayyip Erdoğan is the “Hitler of our century” on Monday in New York in his first comments since his detainment at a Romanian airport over the weekend.

“I’m open for adoption,” Kanter said on Monday in a news conference at the midtown Manhattan headquarters of the National Basketball Players Association. “My next move is to just become an American citizen.”

The six-year NBA veteran, who has become a high-profile critic of Erdoğan, said his political views prompted the Turkish government to invalidate his passport. He said the first sign of trouble came early on Saturday morning in Jakarta, where he was hosting a basketball clinic.

“My manager knocked on my door around 2.30am and said we need to talk,” Kanter said. “He said the secret service of Indonesia and army is looking for you. Turkish government called them and said he’s a dangerous man, we need to talk to him.”

Kanter, who turned 25 on Saturday, then “kind of escaped the country” on a flight to Singapore, followed by a brief layover in Frankfurt before arriving at Bucharest’s Henri Coanda airport on Saturday at about 1pm, where Romanian border police informed him that his passport had been canceled by Turkish authorities.

A senior government official at the Turkish embassy did not respond to a request from the Guardian for comment.

Kanter credited the Department of Homeland Security and lawyers for the Thunder and the NBPA for helping broker his return to the US on a flight from London to New York later on Saturday.

The 6ft 10in center said he’s chosen to speak out against Erdoğan, whom he called a “terrible man” and the “Hitler of our century”, after contemplating his visibility as one of Turkey’s most famous professional athletes.

“I’m not a journalist, I’m a basketball player,” Kanter said. “But right now, my family can’t even go out to eat. My brother told me my dad went to the supermarket and they spit on his face. I try to be the voice of those innocent people. I believe whatever it takes is important for those kids and our future. Because those are going to be the kids that make the changes.”

He told reporters that he has refrained from speaking to his parents in Turkey for more than a year over fears their phones have been tapped by the government. “As soon as they are in contact with me, they’d put them in jail,” he said.

Kanter’s detainment was first made known after he posted a video to Twitter on Saturday morning saying that police officers have “been holding us here for hours” upon his arrival in Bucharest.

He expressed his belief during Monday’s 25-minute remarks that the worldwide dissemination of the message aided his escape. Kanter, who received his green card last year, described himself as “countryless” and hopes the US government will consider accelerating his path to citizenship.

Last year, Kanter revealed he received death threats in response to his support of exiled Muslim cleric Fethullah Gülen, Erdoğan’s political rival. The posts, written in Turkish, included phrases such as “You will die soon” beside ominous images of weapons and nooses.

Kanter spoke out against Erdoğan’s government in March 2016 after a terrorist bombing in Ankara that killed 37 people and injured more than 100, criticizing the country’s obstruction of broadcast media and access to social media.

“There are thousands of people getting kidnapped, put into jail, getting tortured or raped. I stand for what I believe,” he said on Monday. “I hope the whole world is watching this, human rights groups and the European Union. I want people to do something about it.”

Last week, Erdoğan’s visit to the White House was marked by a clash between his security detail and protesters outside the Turkish ambassador’s residence. Nine people were hurt and two arrests were made.

Previously, Kanter, who was tabbed with the No3 overall pick in the 2011 draft, said he was left off Turkey’s national team for EuroBasket 2015 due to his political beliefs, a claim denied by national team coach, Ergin Ataman.

Kanter averaged 14.3 points and 6.7 rebounds in 72 games this season with the Thunder, who lost in the first round of the playoffs to the Houston Rockets.