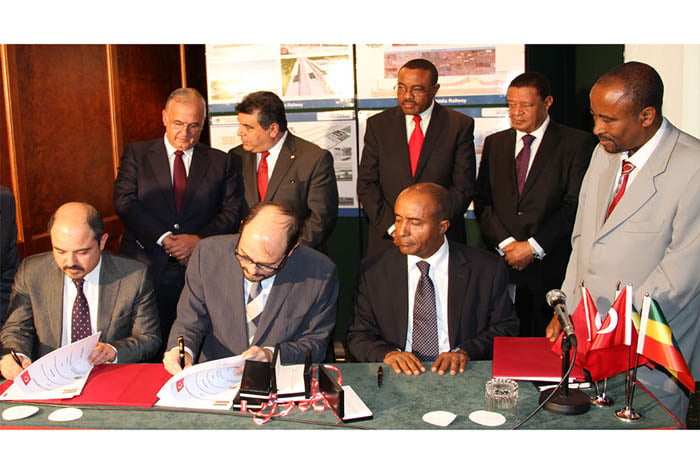 Turkish business delegation met their Ethiopian counterparts at the offices of the Ethiopian Chambers of Commerce and Sectoral Associations on Thursday to surf the business opportunities the two countries offer each other.

Ethiopian Chamber of Commerce and Sectoral Association (ECCSA) Secretary General Gashaw Debebe welcomed the delegation and addressed the potential areas in which the two countries may engage in.

The Turkish business delegation led by CEOs for iNSiAD, TUSKON, MARiFED companies in Turkey discussed various issues with the Ethiopian business communities who have been business partners with Turkish groups. “We see Ethiopia as Africa’s biggest business opportunity,” Ahmet Akiskali, president of INSIAD, said on the occasion. He said that the Turkish business people are yet to be opened for the world as more interest is growing towards Ethiopia.

Gashaw noted that the ECCSA has arranged an international trade fair between Turkey and Ethiopia to take place in Addis Ababa and Istanbul in November. According to the Turkish business delegation, a multibillion-dollar investment is already set up by Turkish companies in Ethiopia. The three companies that signed a memorandum of understanding with ECCSA some six months ago finally resulted in an Ethio-Turkish Business Summit held in Ethiopia in May which highlighted the ever-growing trade and investment links between the two countries as Prime Minster Hailemariam Desalegn hailed it, as a lot of Turkish companies have become promoters of Ethiopia over the last decade.

Most recently, an Ethio-Turkish industrial zone development project being undertaken on the outskirts of Addis Ababa has been suspended by the government due to a potential threat it poses at one of the city’s water treatment plants. The two countries vow to strengthen the promising trade and investment link that has risen more than 400 percent in the last decade while the trade volume jumped from USD 110 million in 2011 to USD 550 million in 2013.