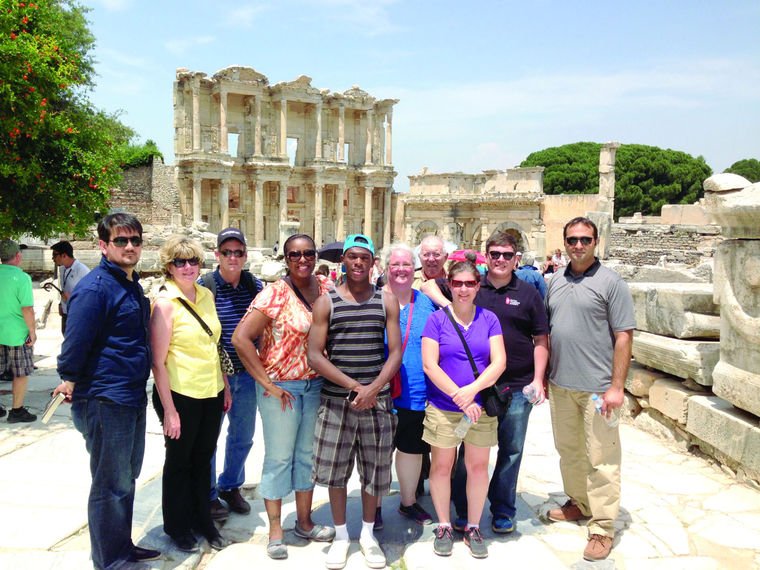 “It’s an intercultural approach to building towards a way of life so that different religions can live together with peace and respect,” says Dr. Nancy Pittman, Broken Arrow (BA), dean of Phillips Theological Seminary who recently returned from one of the trips. She and her husband, Dr. Don Pittman, former professor and dean of PTS, made the trip traveling with Susanna Southard; Brandon Scott; Lora Conger, BA; Geoff Brewster; Evette Sims; and J. D. Miller II, most of whom are on the faculty and staff at PTS.

“No one is converted. We show others that we can coexist,” Nancy Pittman concluded.

Raindrop was established by Turkish Americans in 2,000 in Houston, Texas. Raindrop is now in eight states with 17 branches.

“Our trips in Oklahoma started 10 years ago,” explains Dundar. “Within that time we have had 250-300 people travel with us.” Dundar said although the trips are considered altruistic, there is a good mix of seeing historical sites and visiting local people, exchanging information about their cultures.

The long-range goal, one trip at a time, is to create peace among nations.

“We never intend to change anyone,” Dundar said, sharing that his respect for focusing on values which would be important in future life began when he was in a college preparatory high school.

Nancy visited the headquarters in Istanbul and saw some of their work.

“The whole issue of knowing our neighbor is even more important in the 21st Century or the planet will explode,” Nancy Pittman said. “We need to be making room for one another with respect.”

“We focus on what we have in common,” said Dundar. “Both sides are asked to respect one another.”

“To love and respect one another,” added Nancy Pittman. “We worship the holy, the God who called us all into being. We try not to impose our values on others, but we let values be spoken.”

According to Dundar, Turkey is a modern secular state. Although 97 percent of the population is Muslim, the secular state wants people to worship as they please. There is freedom of religion, particularly if compared to Iran or Saudi Arabia. There may be a mosque an church side-by-side.

“Muslim women have a choice about what to wear in Turkey,” he said. “They can choose to cover up or to dress in modern clothes. Women in Turkey make their own choices.”

Since the Ottoman Empire in 600-700, freedom of religion was never opposed and the Turkish language was not changed. “We come from that tradition, with churches and mosques side-by-side.” says Dundar.

Nancy Pittman said she and Don Pittman stayed with a family as did others in the study group.

“They went out of their way to see that we were comfortable and well fed,” she said. “That made this not just a tour, but a trip during which we got to know the people.”

Dundar usually takes one trip a year, but he took a second this summer with a group from OCCJ, Oklahoma Center for Community and Justice.

Raindrop is part of The (Fethullah) Gulen Movement which was started by retired Islamic scholars living in the U.S. Although started in the 1980’s, it was in the 1990’s that they started to make real progress.

“They decided they didn’t need any more mosques,” said Dundar. “They needed to build more schools and universities.” People have come together to make that happen; 1,200 schools have been built among 160 countries in the world. Most of the schools are private, but there are scholarships for those who cannot pay. Like Raindrop The Gulen Movement has cultural centers with cultural art like the one in Broken Arrow, as well as a dialog center.

“They are basically bringing people to the same table so they can see what it’s like to live together,” Nancy Pittman said of the worldwide effort. She visited their headquarters in Istanbul during the trip and got to see some of the work the movement has done.

“They are a large movement to meet human needs. They are like the Red Cross. They do a lot of disaster relief work, helping people all over the world regardless of their religion.”

Gulen’s earliest attempts to reach out to Christians and Jews in this country, inviting them to dinner and beginning a dialog, started in the 1930’s, but he was highly criticized by the Muslims in Turkey.

“The dialog is different every year,” said Dundar, “people of different nationalities.”

According to Dundar, the trips to Turkey are sponsored. Travelers pay their own round-trip airfare which is about $3,000, and a sponsor in Turkey pays all other expenses.

The local dialog center hosts an annual Turkish Festival. The last one was held in May, but Dundar said the plan is to move the date to September in hopes the weather will be more predictable than in the spring although 1,500 people attended in May. “There were a lot of people, lots of food, and of course our arts, Dundar said.

To find out what kinds of classes are offered locally, one can go to raindropturkishhouse.org/oklahoma/tulsa. The center is located at 4444 W. Houston St.

An untimely power outage couldn’t dim the mood of hundreds of people who gathered Saturday to celebrate the new Turkish American Society of Chicago Cultural Center in Mount Prospect. “There’s some irony here because out of today’s darkness, this center will be a real beacon, a light on the greatness of your community,” U.S. Rep. […]

Michael Martin Garrett The Muslim holy month of Ramadan is known throughout the world as a period of fasting, but equally important to the month’s cultural history are the street celebrations where adherents come together each night to break their daily fast. State College got a small taste of this celebratory aspect of Ramadan – […]