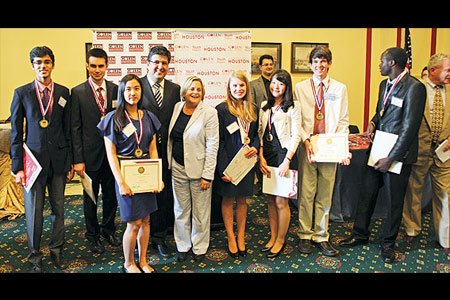 Houston University’s Gülen Institute bestowed awards on 35 young people from 65 countries and 45 US states for their winning essays on how to address crimes against children around the world on Capitol Hill in Washington, D.C. Nearly 1,300 compositions had been entered into the Gülen Institute’s international essay competition. The award ceremony was held at the House of Representatives’ Rayburn House Office Building.

Calling Turkey and the United States “unwavering allies,” Ros-Lehtinen said “Our two countries have been steadfast allies for the past six decades and continue to cooperate closely on so many of the challenges that we are facing today.”

She continued to speak of Turkey’s actions in Syria and Afghanistan with praise and added that “generations of Turkish immigrants have come to the United States, enhancing our society with their talents and their skills.”

The first place $3,000 prize went to Alexander Kamberov from Bulgaria for his essay on child soldiers in Sub-Saharan Africa. Ruby Guo from the United States took second place for her work on child workers. Jae Woo Jang from the Philippines, who addressed the issue of human trafficking, won third place.

Members of Congress David Dreier of California, Joe Heck of Nevada and Greg Walden of Oregon awarded the students with certificates of recognition from Congress and congratulated them on behalf of their constituencies.

The 35 young winners were also awarded a five-day trip to Washington and New York. Gülen Institute Executive Director Ali Rıza Çandır said of the trip: “The young people will not just visit these cities as tourists. They will learn about different cultures as they dialogue with other young people from different countries.”

James W. McJunkin, deputy director of the FBI’s Washington office, discussed the methods of fighting crimes against children with the contestants. The contestants visited the Turkic American Alliance (TAA), a leading Turkish-American umbrella organization, and the United Nations office in New York.

Ministers, academics, bureaucrats, entrepreneurs, opinion leaders and nongovernmental organization representatives from all over the world attended a reception held by the İstanbul-based Journalists and Writers Foundation (GYV) at the Waldorf Astoria Hotel in New York