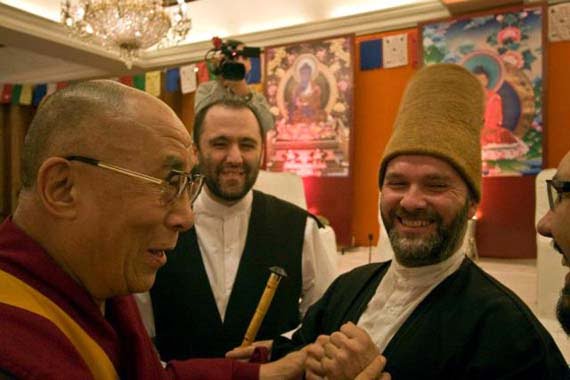 Exiled Tibetan spiritual leader the Dalai Lama watched and praised a sema, or whirling dervish ceremony, during a Turkish festival which lasted from Friday to Sunday in New Delhi, promoting traditional Turkish arts and culture.

The three-day festival was held for the first time last year, and this year it takes place in the popular Select Citywalk mall in New Delhi. The event was organized by the Indian-Turkish Indialogue Foundation.

Watching the sema performance on the second day of the three-day event on Saturday, the Dalai Lama said he liked the show very much. He also took a picture with some dervishes. The spiritual leader was then presented a ceramic plate bearing Ottoman calligraphy on it.

In a speech during the first day of the festival on Friday Akçapar said India and Turkey have historically close ties adding that the ties between the two countries should be strengthened with further tourism and trade agreements. Saraswati also said in his address to the audience that he had a chance to visit Turkey last year and was deeply moved by the hospitality and sincerity of the Turkish people.

The Indialogue Foundation’s Yavuz Kotan said 15 million Indians travel abroad every year and that of this number some 75,000 visit Turkey. “This kind of festival contributes to bilateral ties both in social and financial terms,” Kotan noted.