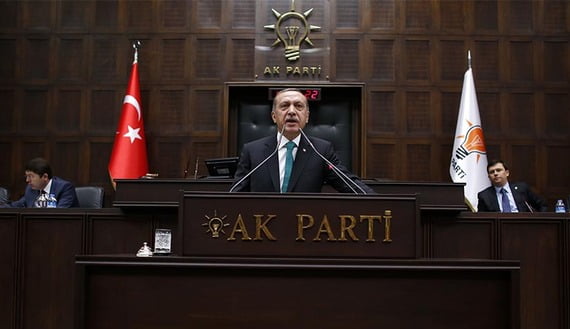 The first victims of the AKP versus Gulen movement [Cemaat] warfare that dramatically escalated with the Dec. 17 corruption and bribery operation and culminated with four cabinet ministers losing their seats were the judiciary of the country, law and therefore Turkish democracy.

According to Prime Minister Recep Tayyip Erdogan and Justice and Development Party (AKP) spokesmen, the investigations and operations launched against ministers, high-level bureaucrats, businessmen close to the government and the prime minister’s son Bilal Erdogan are nothing but a “coup attempt” of international dimensions against the government. AKP leaders think that the target of this operation is, at the least, “an AKP without Erdogan,” and indicate that a “parallel state” is managing the project. What the AKP spokesmen and their supportive media mean by “parallel state” is the Gulen Cemaat supporters within the security and judiciary institutions. Organized and coordinated actions of these people toward a political objective are described as manifestations of the “parallel state.”

But a reminder is warranted here: The Gulen Cemaat, a sociopolitical Islamic movement going back 40 years that has sought to transform society by educating Muslim cadres, was actually a partner of AKP in ruling the country until early 2012. Cemaat members in the thousands penetrated many state institutions from the judiciary to security agencies, and from educational institutions to civil administration offices, with the approval and support of the AKP. Eventually the Cemaat members assumed key positions. Therefore, if there is organized activity by Gulen Cemaat members within the state, it would be best to describe it as a “state within a state” instead of a “parallel state.” But the AKP can’t use the concept of “state within state.” Otherwise we would have the right to ask the AKP, “Where were you when the Gulen people were setting up a state within a state? In a deep slumber?” AKP leaders can’t answer this question because in the past they worked as partners with the Gulen Cemaat and they themselves are primarily responsible for today’s grim political outlook.

This is how the situation is best described today:

Solid evidence of corruption, bribery and graft that have cast serious suspicions on the AKP government are out in the open. We owe this situation primarily to the collapse of the political partnership between the AKP and the Gulen Cemaat primarily because of discord on power sharing,and secondarily to some ideological and political-concept disagreements. All were replaced by an unyielding power struggle.  Mind you, for the Turkish public to become aware of the corruption cases because of the eruption of a power struggle between the AKP and the Gulen Cemaat does not wipe out nor extenuate the reality of the corruption.

An elected government — it doesn’t matter from which party — should not have allowed the Gulen Cemaat to establish itself as an autonomous body within state organs, pursuing its own political agenda. Now the AKP government is trying to cleanse itself of this alien body with witch hunts or by trying to fully subjugate the judiciary to the state. The legitimacy of the AKP government will thus be seriously hampered. The corruption that has placed the AKP under a massive ethical burden will not be cleared or punished at the ballot box, but in the courts. A government that is aware of the situation would have allowed well-prepared investigations to be undertaken and would allow the documentation of the thefts following the letter of the law.

But the AKP government thinks that by labeling corruption investigations and operations as a “coup” and calling those behind them as “parallel state” that it has found a justifiable way to interfere with the judiciary. Otherwise the government would not have submitted a draft bill to the parliament that totally eliminates the functional independence of the judiciary bureaucracy and promotes the minister of justice, who represents the executive branch, to the status of single decision-maker.

The bill submitted to the parliament on Jan. 7 proposes the transfer of powers from the Supreme Board of Judges and Prosecutors (HSYK), a high-level constitutional body that has the sole authority for all the appointments and missions in the judiciary, to Minister of Justice Bekir Bozdag.

If this draft bill is enacted, the minister of justice, who is simultaneously the chairman of the 22-member HSYK and who represents the executive in that body, will have extraordinary powers in redefining administrative functions of HSYK members, to discipline them and to decide which HSYK office will be dealing with what issues. The authority for determining the agenda of the HSYK and to issue bylaws is also transferred to the minister.

In short, this AKP proposal would fully obliterate the independence of the judiciary’s highest bureaucratic organ vis-a-vis the executive and would make the HSYK’s existence meaningless. The result would be full control of the judiciary by the government and the definite end of separation of powers.

HSYK secured its current structure as a result of  the Sept. 12, 2010, constitutional amendment referendum. The AKP-Cemaat partnership of the period to eliminate the high judicial bureaucracy that they accused as being “Kemalist” and “pro-tutelage” ensured the passage of a constitutional amendment regarding the HSYK. But the new regime did not last more than three years and four months because of the fallout between partners. Now the government is again resorting to power-struggle methods to uproot its former partners from the judiciary.

Then, why is the AKP opting for such a course that will hurt its legitimacy, along with total elimination of judicial freedom?

There are two answers to this question:

First, the government thinks that the HSYK is largely controlled by the Gulen Cemaat. In this connection one has to remember the Dec. 26 declaration of the HSYK that infuriated the government. Four days after the first anti-corruption operation of Dec. 17, the government, with an amendment to bylaws that contravened the principle of “investigative confidentiality,” required prosecutors to keep head prosecutors informed of all investigations they were undertaking. As judicial police also required the prosecutors to keep provincial governors informed of their investigations, investigations without the government’s knowledge became impossible in Turkey. Thirteen members of the HSYK, in a statement they issued Dec. 26, declared that they had found this change in bylaws as a “violation of the principles of the rule of law.”

The government said this was a “pirate declaration.” But the Council of State a day later also adopted a decision in line with the HSYK declaration and suspended the application of the bylaw change.

The second answer to ”why AKP government wants to take over HSYK” should be this: The government, by transferring all critical powers of the HSYK to Prime Minister Erdogan via Minister of Justice Bozdag is planning to remove prosecutors and judges it considers as close to the Gulen Cemaat from critical posts.

Whatever the reason is, if the fantasies of the government to take over the judiciary are realized, the separation of powers will cease to exist and will invalidate Turkey’s claims to be a “state of law.” This would mean that Turkey would no longer have the Copenhagen Criteria qualifications to negotiate for membership with the EU. Turkey would therefore become a country whose political culture and structure would be closer to oppressive regimes of the Middle East and the Shanghai Cooperation Organization.

What is truly depressing is the desire of the AKP government to make the country pay heavily to avoid further corruption cases and circumvent the existing ones.

Legitimate and democratic reaction of the government when faced with problems in the judiciary should have been to call the parliament to duty and change the makeup of the HSYK after reconciling with the opposition.

Let’s assume that if parliament approves the new HSYK bill, that President Abdullah Gul is likely to veto it and that the Constitutional Court would not allow its implementation.

Such steps might save Turkey from the adverse consequences we have been talking about, but the situation can hardly be called promising. The Republic of Turkey has lost its qualifications to be a state following the rule of law. The executive is openly preventing investigations by prosecutors. For example, on Jan. 1, the prosecutor who was tipped that a truck was illegally transporting weapons to Syria could not have the truck searched because of intervention by the executive branch. For example, on Dec. 17 prosecutors in charge of the first corruption operation were reassigned. Erdogan found it easier to ask the anti-corruption prosecutor Muammer Akkas: ”Who are you working for? We are not finished with you.”

A second wave of anti-corruption operations — planned for Dec. 25 — was blocked by the executive.

For example, on Jan. 7, police chiefs in Izmir were removed from their posts within a day after they detained several suspects — including the brother-in-law of AKP’s Izmir mayoral candidate and former Minister of Communications Binali Yildirim — on charges of graft and tampering with a bidding process involving the Izmir Port Authority.