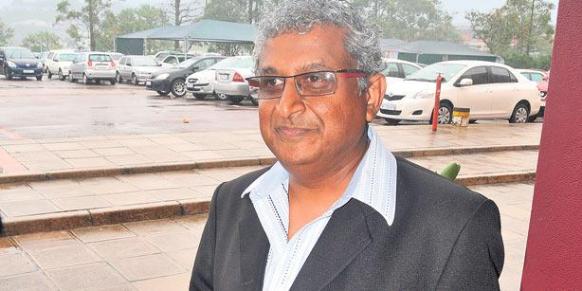 The Gülen movement, a religious-based social movement with millions of followers in Turkey, is challenging the increasingly competitive philosophy based on marginalizing and outdoing others and offering new ways of looking at cooperation and working together, says Michael Samuel, dean of the Faculty of Education at the University of Kwa-Zulu Natal in Durban and life-time educator with good knowledge of schools founded by the Gülen movement.

Samuel, sharing his background with Sunday’s Zaman readers, said he comes from a history of teachers and educators. “Five generations in my family were involved in education. I call it ‘education is in the blood,’ — thus I could not escape choosing to become a teacher to begin with.”

Samuel was first introduced to the work of Fethullah Gülen through a Catholic priest, known as Father Mickelson. “I was inspired by his leadership growing up as a teenager. Years later, after being in constant communication with him, Father Mickelson invited me to one of the Turquoise Harmony Institute iftar dinners in Durban. I continued to learn more about the Gülen movement through association with the Star Colleague School in Durban, and it culminated when I went on a cultural exchange program to Turkey. As an academic, I was interested in how this movement was being transferred into the education system, so our cultural visit was geared towards looking at school systems. During this time, our guides in Turkey introduced us to some of the literature on Fethullah Gülen, which I brought back home with me and started reading. That relationship grew as we continued to discuss the literature, and that’s how I first got exposed to Fethullah Gülen.”

He said what surprised him about the people of the Gülen movement is “their generosity, and specifically their generosity of spirit, which stands out for me.” He said his experiences interacting with people representing the movement showed him that the followers pay generous attention to what the other person wants to know about.

He continued: “Another is their generosity of time, the way people give their time and just their general commitment to service strikes me as something that we can learn a lot from in their South African education system. During my interaction with them, I was also impressed by their hospitality — not only dinners and events, but the hospitality of spirit. In addition, there is openness about ideas and discussions.

“But, for me, what stands out the most is my experience with the student teachers, who came to South Africa from Turkey and who began to influence me about what they found very strange with the South African education system. My interaction with them made me interested in their thinking and what informed their thinking about our education system, which then sparked my research into this, and, through this process, I got to learn more about the Gülen movement, education and schooling. Thereafter, I began interviewing Turkish teachers at Star College as a second part of my research. After sharing this research within … education and academic circles at seminars and conferences where I spoke, it brought about the discussion of a philosophical approach to education rather than the traditional operation approach. My interaction with Turkish students and teachers, and reading Gülen’s work, made me ask questions about a commitment to caring about students versus concentrating only on the academic outcomes within the education system.”

He said the Gülen movement, also known as the Hizmet movement, is making a significant contribution to the wider world in an era of an increasingly “get ahead” policy in global politics. “Everyone is trying to out-compete each other or, in the process, trying to marginalize others. But what the Hizmet movement says is: Let’s all grow together, all of us have potential, all of us have resources, all of us have contributions to make a better world. And within our education systems, if we continue on this process of creating competitiveness and ‘getting ahead’ philosophy, we will continue to face the same problems that we face now, whether it is locally, nationally, regionally or internationally. Even with regards to personal relationships, if you attempting to outdo or subjugate someone else, then you going to end up with an oppressive education system — hereby you teach individuals, religious groups, families and nations to be oppressive, and that’s the problem. The Hizmet philosophy for me, challenges us to ask questions of cooperation, rather than oppression — and that is the challenge in the world today,” he stated.

Samuel said he believes education is central to the Gülen movement because, “Education is about service and once you are educated, you take on the responsibility of assisting others to grow.”

He also shared his opinions on Gülen schools in South Africa. “Our society is driven very much by the underperformance in math, science and technology. The Hizmet schools in South Africa come under the spotlight immediately because they are able to show that they can produce good quality results in math and science. That’s how you get the attention of government officials who ask what makes a school produce these kinds of results where other schools are not performing? However, we must understand that the Hizmet movement is not just about getting good math and science results, but rather, it brings into account a different concept about the relationship between the teaching community, the community of the school and the community of the home — and how are we bringing them closer together.”