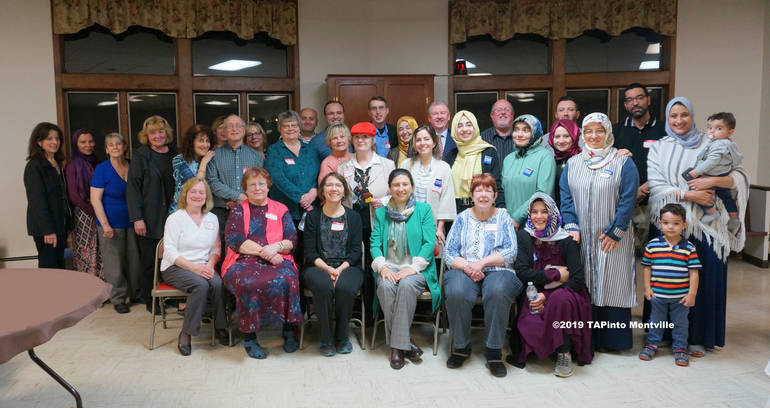 MONTVILLE, NJ – Approximately 75 people gathered at the Montville United Methodist Church in Towaco May 10 for an interfaith Iftar dinner. The Iftar is the meal that Muslims eat after sunset during the holy month of Ramadan to break their daily fast. Christians, Jews and Muslims ate together at the meal, sponsored by the Peace Islands Institute, to learn something about the Islamic faith and share conversation and peace, in the words of Montville United Methodist Church Pastor Donald Kirschner.

“We’re here to eat good food, learn lots, and share conversation with our brothers and sisters who are across the board in terms of background and faith,” Kirschner said. “We’re excited to all come together tonight to take a stance of unity and peace amidst an often divisive world.”

Nuray Yurt, Board President of the Peace Islands Institute in New Jersey, introduced herself and said many of the New Jersey members are Turkish-Americans.

“We love coming together, getting to know each other, and having food as the center of the event,” she said. “Food is always a good reason to come together. We have a lot of volunteers who cooked some pretty good food!”

Peace Islands sees disunity, ignorance and poverty as problems and therefore tries to bring about unity, education, welfare and progress to bring about peace, according to the video shown at the event. To that end, they organize panels, conferences, art and essay contests, and friendship dinners such as the one held at the church.

Yurt then educated the group about Ramadan. It is a holy month during which Muslims fast from sunrise until sunset, with the desire to increase spirituality and discipline.

“It’s easy to be spiritual by yourself,” she said. “But during Ramadan, you are encouraged to be with others. This is where, to me, the challenge comes.”

Yurt said that fasting is one of the five pillars of the Islamic faith, which include almsgiving, praying five times per day, acknowledgement of one’s belief, and a pilgrimage to Mecca. Muslims get up before sunrise and eat a large meal, and “we still have to go to work,” Yurt said with a laugh. The sick, the elderly, and children are not expected to fast, she said. Young men and women are expected to begin fasting around age 15, and participate in the traditions of getting up before dawn as a way of practicing before that age.

When Yurt took questions, a member of the group wanted to know how Muslims pray at work. Yurt said most companies are very accommodating, and that in the winter more praying has to be done during the work day since the days are shorter. Another member of the assembly was curious about what the prayers consist of, and the Muslims in the group said that they ask Allah to “put us on the straight path.” Forgiveness is also sought, and verses from the Quran are also recited, Yurt said.

Kirschner said that the act of fasting, for the Christians, has a lot in common with the Muslims.

“Fasting is an outward expression of an inward devotion,” he said. “When we fast, we want to know God more fully. It’s something we don’t practice as much as we should. Christians typically fast during the season of Lent. [The 40 days before Easter.] I think we, as Christians, can learn a lot from the discipline that we see in our Muslim brothers and sisters.”

“We can learn from each other,” Yurt said.

Then the adhan, the call to prayer, was sung.

After sundown, dinner was served, as cooked by the volunteers from the Peace Islands Institute: a delicious feast of lamb meatballs, rice, potatoes, salad, lentil soup and baklava.