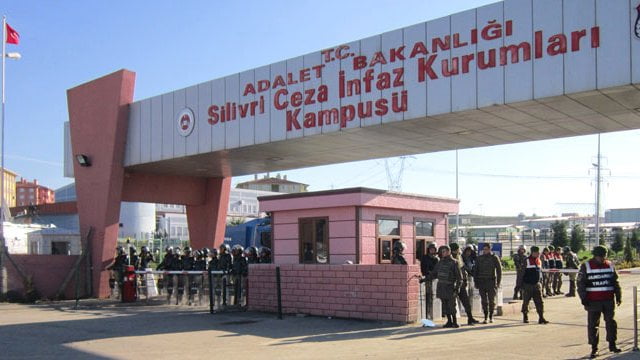 Their fears of such nightmarish scenarios are not based on conspiracy theories created by desperate families, but rather reports by the mainstream media, which in the eyes of critics firmly placed themselves in toes with the government’s policies.

Last week, both NTV channel and Sabah, a leading pro-government daily run by Serhat Albayrak, brother of Energy Minister Berat Albayrak, run stories about plans by coup plotters in Sincan prison in Ankara to stage a riot for a mass prison break.

NTV even shared detailed maps and diagrams of Sincan prison allegedly found among notes in the cells of prisoners jailed on coup-related charges. NTV reported that authorities deployed special police forces and increased personnel to prevent a riot in Sincan prison which normally has a capacity of 6,000 inmates but now overcrowded with more than 8,000 prisoners held in a pre-detention trial.

It also resembles one of Turkey’s disastrous security operations that took place in 2000 to end collective hunger strikes in several prisons. At least 10,000 Turkish troops joined a massive operation and intervened in 48 prisons to forcefully end two months of hunger strikes by nearly 800 political prisoners of different backgrounds, leftists, and Kurdish ones.

When the operation dubbed as “Return to Life” ended, 31 prisoners and two soldiers were killed, 425 prisoners were wounded, eight of them disappeared. Human rights groups accused security forces of burning prisoners by firebombs and the use of other chemical gasses during the operation in closed prison wards.

According to the NTV report, prisoners who mostly consist of leading figures of security bureaucracy, military officials, including top generals, and police officers, found ways to communicate each other through handwritten notes and worked on detailed plans how to spark a riot. The inmates, the report said, intentionally apply for a medical check with the aim of meeting with each other at a hospital for an exchange of plans. The gendarmerie brigade command, responsible for the security of highly-guarded Sincan Prison, prepared a report about plans for “prison break,” urging authorities to step up security measures at the prison, the NTV report said.

But what NTV showed as evidence of prison break plans have become an object of mockery on the social media, prompting debates about the authenticity of the story. Many accused NTV and other pro-government media of appearing as spin doctors with manipulative news reports, even laying ground to justify a future intervention by authorities to kill all prisoners in a staged riot. Journalist Ahmet Sik in a tweet slammed those media outlets that published the report without any fact-checking and critical review.

Of 8,076 inmates in entire Sincan Prison, NTV gives the number of alleged members of FETO (Fethullahist Terror Organization) as 5,544, based on government claims rather than a court verdict. The government portrays the Gulen movement as a terrorist organization, a charge denied by Gulen and his followers. The government has widely used FETO to brush anyone critical and non-loyalist in its massive purge and crackdown against all sort of critics.

The media talk points to the fact that post-coup prisoners are indeed in mortal danger. That gives legitimate concerns to families and prisoners over their safety and wellbeing.

It was these media reports that placed them under a state of insecurity. A lawyer of prisoners in Istanbul’s notorious Silivri prison where most of journalists are held warned against a similar scenario for the prison. He called for international rights organizations to inspect Turkey’s prisons.

“According to unconfirmed information my clients received from their families, officials will open the gates [of holding cells] for prisoners to escape as if in a prison break. And then soldiers will be ordered to shoot them,” lawyer Ömer Turanlı tweeted on Saturday.

To foil the plans, Turanli urged prisoners not to go out if gates of holdings cells are opened.

Turanli called on the EU and other key international human rights organizations to closely monitor what is taking place in Turkey’s prisons. He shared his concerns over the safety of his clients who are former police chiefs that launched a corruption investigation against members of the cabinet three years ago. The government pushed back the investigation by killing off the legal process through the purge of prosecutors and police chiefs and placed them behind bars in counter trials.

NTV report says the prison riot was scheduled to take place in November, the same date set by a former colonel, who is aligned with President Recep Tayyip Erdogan’s new strong ally Dogu Perincek, leader of Homeland Party (Vatan Party). Retired Col. Atilla Ugur claimed that another coup attempt would take place in November and would be bloodier than the July one. Back in September, pro-government figures on the social media suggested placing all Gulenists in the same prison to execute them easily in case of another uprising against the government.

The prison saga recalls a gut-wrenching tragedy that left 1,200 inmates killed by security guards in Abu Salim prison in Tripoli in Libya in 1996. After talking to one of the survivors, the HRW in 2006 detailed how the gruesome incident took place after a riot attempt by three hardline prisoners who were just recently jailed at Abu Salim Prison. Despite prisoners ended revolt through negotiations and returned to their cells, special units nevertheless killed them in a mass execution in the yard of prison by grenades, machine guns, and AK-47 rifles, witnesses said.

Fatal operation in Turkish prisons in 2000

It also resembles one of Turkey’s disastrous security operations that took place in 2000 to end collective hunger strikes in several prisons. At least 10,000 Turkish troops joined a massive operation and intervened in 48 prisons to forcefully end two months of hunger strikes by nearly 800 political prisoners of different backgrounds, leftists, and Kurdish ones.

When the operation dubbed as “Return to Life” ended, 31 prisoners and two soldiers were killed, 425 prisoners were wounded, eight of them disappeared. Human rights groups accused security forces of burning prisoners by firebombs and the use of other chemical gasses during the operation in closed prison wards. The strikes were launched by the members of the Revolutionary People’s Liberation Party-Front (DHKP-C) to protest their transfer to US-style ‘F-type’ cells from large wards in a government project to transform the country’s prisons to break the monopoly of militant organizations inside jails.

What justified the calamity was national and mainstream media’s acquiescence to government policy as it repeatedly parroted its official narrative. That was in contrast to credible evidence provided by independent groups and families of the prisoners who disputed official remarks over the operation played out.

Justice Minister Hikmet Sami Turk back then intentionally provided false information to the media about how the killings and deaths took place. Several years later an investigation was launched into officials who oversaw the “Return to Life” operation that aimed to save prisoners from self-inflicted starvation. But it was too late as hundreds of prisoners were left with lifelong injuries and burns while families were unable to access to autopsy reports of their beloved ones.

With the current media reports and warnings from the lawyer, critics suggest that authorities might be preparing for a similar scenario at a time when about prisons are filled with tens of thousands of post-coup detainees.