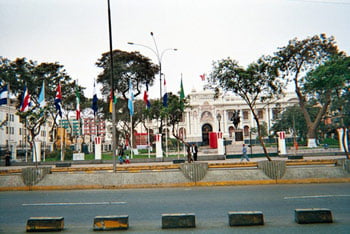 ‘Kimse Yok Mu’ humanitarian aid organization, which is associated with Gulen Movement, organized a feast of sacrifice program in the Parliament’s yard in Peru.

Speaking at the ceremony in the garden of the Assembly, Zumaeta Cesar Flores, president of the Peru Assembly said:

‘Kimse Yokmu’ came to celebrate ‘Feast of Sacrifice’ with us. They make the same donations abroad like they do in their home country. An example of this is Peru. They will not only donate in city of Lima. Besides Lima, they will also climb up city Puno, which is our highest city. Height of the city is 4 thousand 800 meters. They have been providing support in our country for many years. The first place they began to help were the people injured during the Pisco earthquake in 2007. Day by day, the Turkish Peru Caucus in our Assembly has been improving our relationships by taking it to advanced levels. They are trying to develop our commercial and cultural relations. I thank Turkey for its support to Peruvian families who are from different economic levels.”

Kimse Yokmu representative Mehmet Isitan stated that the organization started helping people in Peru after the great earthquake in August 2007, and he also assured them of further support.

Pointing out the fact they had no expectations in return for the help they provided, Isitan said: “ We wanted to show the generosity of Turkish people by celebrating Feast of Sacrifice with Peru people. It is celebrated not only in Peru, but also in different countries of world. We find those poor people and try to help them.”

The news was published on Nov 20, 2010 at in Turkish at http://www.nethaber.com/Toplum/168724/Fethullah-Gulen-cemaatine-yakinligiyla-bilinen