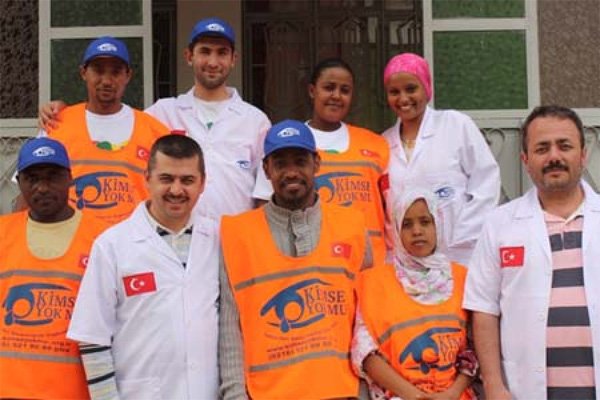 A hospital is set to be established jointly by the Marmara Health Federation (MASFED) and Turkish charity Kimse Yok Mu (Is Anybody There) in the African country of Ethiopia, where the average life expectancy in only 40 years.

The 40-bed hospital is expected to open on Aug. 1. A total of 50 medical health-care personnel from both Turkey and Ethiopia will serve the people in the Turkish hospital. Ten of doctors working in the hospital will be Turkish. Five of them will stay in Ethiopia permanently while the others will stay in the country for period of three to six months. The hospital will particularly fight against epidemics such as malaria, measles, meningococcal septicemia and typhoid fever, which are the main problems in the country, as well as infant mortality. Speaking to Today’s Zaman MASFED President Ahmet Seyfi Gözaydın said: “Ethiopia’s Harari region was once under the administration of Turkey’s predecessor, the Ottoman Empire, so we give particular importance to the region. When the hospital’s construction comes to an end, our friends [doctors who are member of the federation] will leave their jobs in Turkey and will go to the Harari region to serve people at the hospital.”

The fields of study of the five doctors who will stay permanently in Ethiopia have been determined. There will be a urologist, a pediatrician, an internal diseases specialist, a general surgery specialist and a pathologist. The other temporary doctors will be from other fields of study. The temporary doctors will change at regular intervals. The Ethiopian doctors and health-care personnel who will work at the hospital will undergo some training in Turkey.

Stating that making such a big investment in Ethiopia has pleased the Ethiopian authorities very much, MASFED President Gözaydın further stated that the average life expectancy is only 40 in most African countries, adding that as the rate of infant mortality and the other medical problems is very high in Ethiopia, the opening of the hospital in the country will be helpful for the residents there.