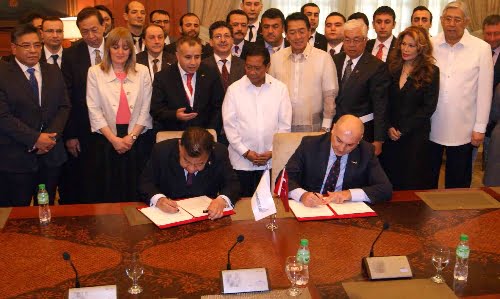 MANILA
Filipino Chairman of Union of Chambers and Exchange Commodities Abdulgani Macatoman praised the Turkish schools operating in his country for their achievements. “My both children are studying at the Turkish schools. These schools have been among the top-rated all the time. We have a total of 926 high schools in the capital Manila and the Turkish schools top the list. I would like to thank Turkish people for establishing these schools.”Maria Rowena Sanchez, the Philippines’ newly assigned ambassador to Turkey, too attended the gathering by Izmir’s Association of Businessmen and Industrialists (IZISAD). Sanchez briefed the audience on investment and business opportunities in her country. She brought up the fact that medical care and food expenses are seven times as expensive as Turkey and called on Turkish companies to partner with their Filipino counterparts in the two fields. She highlighted the potential that a population of 110 million could offer to foreign investors. “ You are welcome to come and partner in particularly agriculture, food, navigation, real estate, tourism and medical care.”

Sanchez made a particular reference to the Turkish Confederation of Businessmen and Industrialists (TUSKON) and its active role in fostering economic ties between Turkey and the Philippines.

Investment and trade opportunities in the Philippines have been on the rise as the government opened the doors to foreign enterprises. “Good administration yields good economy, which is the case in the Philippines. It welcomes you with its opportunities. We have witnessed promising developments over the past three years.”

“International credit rating agencies have rated us higher. With its young, dynamic, educated and English speaking population, the Philippines has flourished over these years. We need more investment along with import and export businesses. So do not hesitate to invest in the Philippines if you manufacture goods and own a brand name.

Speaking of the recent the Haiyan typhoon, the most devastating natural disaster of the past 100 years in the Philippines’ history. “Kimse Yok Mu foundation came for rescue right away. It has established a school and a hospital in the region along with scholarships for 100 students for next five years. We will always remember their assistance,” Macatoman remarked.

Excerpted from the article published [in Turkish] on Cihan on 1 May 2014, Thursday