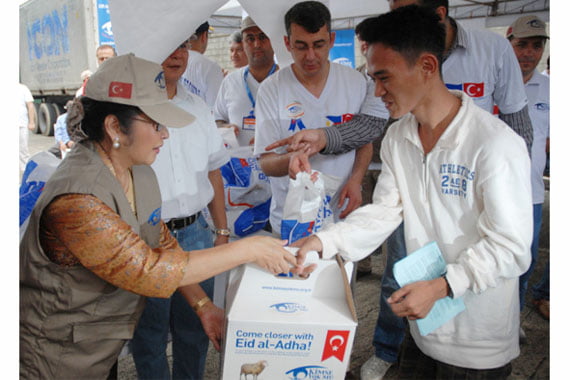 As the the Eid al-Adha aid initiatives came to an end, sacrifice meat aid donated by Turkish philanthropists have been delivered to some 52 thousand families at 11 different locations across the Philippines.

The last part of the aid was distributed over the last Saturday in the capital Manila. The overall aid volume had reached the country from Australia, Denmark alongside the Turkish provinces Kahramanmaras, Ankara, Malatya, Sakarya and Sanliurfa. In attendance of the closing event to mark the conclusion of this year’s distributions were Foundation of International Turkish Schools Director General, Malik Gencer; San Juan Governor, Guia Gomez; Madaluyong Governor, Benjamin C. Abalos along with numerous businessmen and military members. The Office of Commander in Chief staff helped the volunteers with packaging and delivering the aid to those in need.

The local Filipinos and volunteers collaborated in the distribution efforts to reach out to some seven thousand needy families in Manila. Among them, a university student, Edmar Palo spoke to Cihan News Agency: “I’m greatly happy as a Filipino. It’s great to see the people of faith –be it Christianity, Islam or another one- have joined together to extend a hand to others.”

Likewise, Executive Director at Philippine Constructors Association Inc., Manolito P. Madrasto, who considers all the efforts gift presentations rather than aid distributions, said, “These initiatives are uniquely significant in a world currently in turmoil. I’ve known of Turkey for quite a long time. Turkey with its rich culture and people has been assisting the Philippines, which I find very exciting.”

An academic at the Philippines’ Trinity of Asia University, Linda Menegon, said, “People have a lot to share such as time, love, compassion, affection and many more. Meat aid is a means of sharing your time, affection and friendship with others. It’s sharing your life and culture besides material goods, which is -to me- amazing.”

Kimse Yok Mu Foundation, which has been giving off Ramadan joy with the slogan “Fill up your umbrella of mercy with the abundance of sharing” in 110 countries on 5 continents, lifted up this time the orphans in the Nigerien capital Niamey.