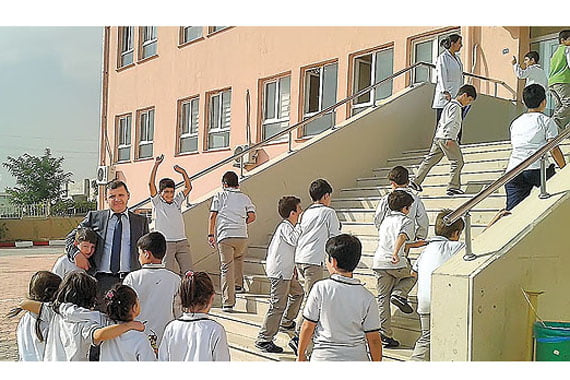 Talking to Today’s Zaman on Thursday about the issue, which headlined the Taraf daily that day, Sabri Şaran, president of Kardelen Educational Institutions, an umbrella organization in the Kurdish-populated southeastern province of Şırnak, expressed his readiness to initiate education in Kurdish once the legal framework is ready.

“What matters to us is education, and we are ready to provide services in Kurdish in addition to Turkish and English, as we do already,” said Şaran, who administers not only a private school in Şırnak but also reading halls, prep schools, kindergartens and youth centers in the area. According to Şaran, the government’s decision is a positive step, since all of their students are ethnically Kurdish but lag behind in classes once they begin Turkish education as it is the only recognized language. “Parents complain that their children forget their mother tongue [Kurdish] once they go to school,” Şaran added, noting that many parents would be pleased to see their children receiving an education in Kurdish.

However, Şaran points out that the process is still not clear, and that they have not received any instruction from the government on the matter. “Once the legal background becomes viable, we have teachers from this region who can instruct in Kurdish,” said Şaran.

Mahmut Umut, principal of Yağmur Koleji, the first and only private school in Şırnak, also told Today’s Zaman that it is not clear how education in Kurdish will function. “We are ready to teach in Kurdish if there is a demand from parents, but we first have to wait for the law and the new system that will determine the number of Kurdish classes in schools,” he said.

Umut explained that, as part of Kardelen Educational Institutions, they discussed the new reform on Kurdish after the government’s announcement and welcomed the idea since they operate in a Kurdish-populated area.

Yağmur Koleji has 388 students at primary and secondary levels in Şırnak.

Allowing education in people’s mother tongue was among a set of reforms announced by Prime Minister Recep Tayyip Erdoğan on Monday. The reform will make it possible for students to receive education in their first language in private educational institutions. The measure paves the way for Kurds, who have long demanded that the government offer full education in their language, to establish private schools providing education in Kurdish. Erdoğan said, however, certain lessons will still be provided in the Turkish language.

The Hizmet movement, whose members follow the principles of Islamic scholar Fethullah Gülen, is known for its cultural and educational activities in Turkey and around the world, along with its efforts to promote intercultural and interfaith activities.

The vice president of Mardin Artuklu University and director of the Institute of Living Languages, Professor Kadri Yıldırım, said on Wednesday that since Kurdish can only be taught in private schools, there should be scholarships for children from families who cannot afford to pay for private schools. However, Yıldırım also welcomed the decision as long as the necessary infrastructure for education in Kurdish is introduced.

The institute, headed by Yıldırım, has a 30-person faculty for Kurdish education. Yıldırım said they are ready to provide teaching materials and teachers to the state if Kurdish is also introduced in public schools.

On the other hand, the secretary-general of Dicle University in Diyarbakır, Professor Sabri Eyigün, raised concerns about the consequences of education in Kurdish. “What will a person who is educated in Kurdish from primary school to college do? Will they be able to find a job based on such an education?” he asked, urging the state to carefully prepare the implementation of such a decision.