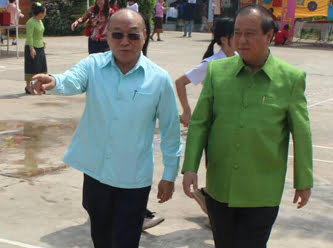 Established in 2006 by Turkish investors, Eastern Star Bilingual Schools recently organized a cultural festival. The event featured promotional presentations of 26 different countries. In attendance of the event were hundreds of people including deputy-president of National University of Laos Prof. Pud Simmavongsi, Ministry of Education officials, principals of 38 schools in the area, parents and students.

Bouapao was unable to make the event due to an emergency. In his statement later, he said he is very familiar with the schools. He made a particular mention of the high quality education offered by top-notch teachers and thanked them for that.

The deputy-minister went on to say the schools are offering a Western curriculum in conformity with the Eastern cultural values, which, according to him, makes the schools unique. “It’s a privilege for our children to have that,” he concluded.

Deputy-president of National University of Laos Prof. Pud Simmavongsi found the event a very effective one in that it enables the participant students and teachers alike to gain invaluable experience. He expressed his thanks to school officials for initiating events of this kind and thus contributing to education. He also said graduates of these schools are sure to have a bright future.

The schools’ general-manager Yilmaz Ari said, “Our festival in its second year received huge interest. We promoted 26 countries this year but we target 50 for next year’s event.”

The Turkish schools in the country had earlier received the national medal twice for their achievements.

Published [in Turkish] on Samanyolu Haber