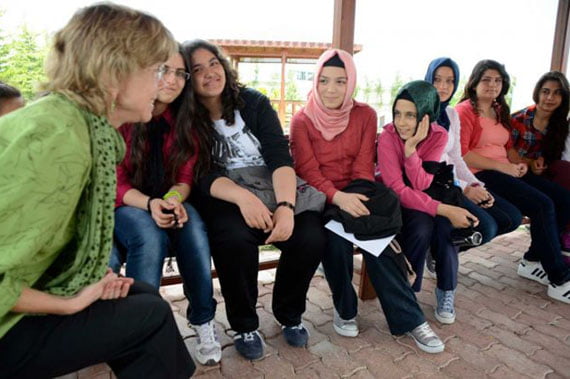 ISTANBUL — The Turkish Cultural Center of Albany, it turns out, is part of a huge but often little-known global movement rooted within the Muslim world that promotes tolerance, service to humanity and better math and science education through the establishment of schools.

This month, the center, housed in a small building in Menands, led a group of six professionals from the Capital Region, including a Times Union reporter, on a 10-day complimentary tour of Turkey with sponsorship from a nonprofit organization within Turkey.

The center has led four similar trips in previous years that included a total of about 20 state legislators, according its director, Veysel Ucan.

“The best way to understand a culture is actually visiting that country and interacting with local people. That is why we organize trips,” Ucan said.

To travel across Turkey was to journey through 10,000 years of history. From archaeology museums showcasing Stone Age settlements and early civilizations in Anatolia to the ruins of the best preserved Greco-Roman city, Ephesus; from palaces and mosques displaying the former glories of the Ottoman Empire to the mausoleum of modern Turkey’s founder, Ataturk, the country’s landscape was dotted with reminders of its rich and diverse past.

In between sightseeing, the trip included visits to local families, business associations, top-performing primary schools, a prominent charity organization, a state-of-the-art hospital, a newly established university and a major newspaper. Everywhere the group went, there was no shortage of Turkish tea, Turkish foods or Turkish hospitality.

It was difficult not to be dazzled, but it was also hard to miss that the trip’s itinerary was designed for sustained exposure to one aspect of Turkey in particular.

All the organizations visited by the delegation, as well as the nonprofit sponsoring the trip, were tied to a growing faith-inspired civic movement called “Hizmet,” which means “service” in Turkish and advocates for interfaith dialogue, altruism and education. The movement was inspired by the message of an influential Turkish imam named Fethullah Gulen, who has lived in voluntary exile in the Pocono Mountains of Pennsylvania since 1999.

The Turkish Cultural Center of Albany, it quickly becomes apparent, is part of a vast network of similar Turkish centers across the United States, all affiliated with the Hizmet movement.

Each center leads similar intercultural trips to Turkey, inviting politicians, academics, journalists and community leaders on all-expenses-paid tours; participants are expected to pay only for their flights.

“I think they want to show the world who they are, to prevent misconceptions and whatever they might have experienced in Turkey,” said Seth Leech, an Albany-based immigration lawyer who went on this year’s trip and has been involved with the center for more than two years.

While the delegation knew of the trip’s ties to Hizmet before leaving Albany, it was not until after a few days in Turkey that the extent of the movement’s activities and financial backings became apparent.

“The trip gave me a greater sense of their foundation in Turkey and how active they actually are; it gave a different face to what I already knew,” Leech said.

Within Turkey, Hizmet has gained a reputation among many as a shadowy movement, bent on infiltrating key sectors and turning Turkey into an Islamic state. Critics’ fears stem partly from a series of sermons by Gulen that emerged in Turkish media shortly after he left for the United States.

“You must move in the arteries of the system without anyone noticing your existence until you reach all the power centers. … You must wait for the time when you are complete and conditions are ripe, until we can shoulder the entire world and carry it,” Gulen was heard saying to his followers.

In another sermon, he purportedly said, “The philosophy of our service is that we open a house somewhere and, with the patience of a spider, we lay our web to wait for people to get caught in the web; and we teach those who do.”

While in the United States, Gulen was charged with attempting to overthrow Turkey’s secular state but was eventually cleared of all charges in absentia.

Three critics who asserted that movement followers are proliferating within the Turkish police and judiciary were arrested in the past few years, sparking claims that the movement has become a suppressive force.

Movement supporters argue the critics’ arrests were due to their ties to terrorist organizations and were not related to Hizmet.

“In Turkey, there are already many anti-Hizmet books published, and many authors are still writing against the movement, and they are not being arrested,” Ucan said.

Movement followers deny any political agenda and point to Gulen’s tolerant message and the positive contributions Hizmet has made in Turkey and across the globe.

Spurred by Gulen’s directive to build schools instead of mosques, movement followers have established more than 1,000 schools in over 100 countries. The schools, which typically focus on math and science, are secular and follow the curriculums of host countries.

There are now more than 120 Hizmet-affiliated charter schools in the United States. Many have been recognized for their high academic performance, but lately some have been criticized for lack of transparency and heavy reliance on teachers imported from Turkey.

The Capital Region does not yet have proposals for a Hizmet- affiliated charter school. For now, the most visible manifestation of the movement’s expansion into the region is the modest two-story building on Broadway in Menands that houses the Turkish Cultural Center.

“The purpose of TCC Albany is to promote understanding and mutual respect among different communities of Capital District region,” said Ucan, who donates 10 percent of his annual income back to the movement.

Movement followers in the Capital Region number above 40 and are mostly highly educated professionals, including engineers, doctors, professors, lawyers and entrepreneurs, according to Leech.

“I believe the movement transcends religions and nationalities and embraces a very humanist approach to issues and people in general,” said Assembly Majority Leader Ron Canestrari, who has been on a previous Turkey trip and was honored with a leadership award by the center last year. “My understanding is somewhat superficial. From what I understand of it, I think it can be helpful.”