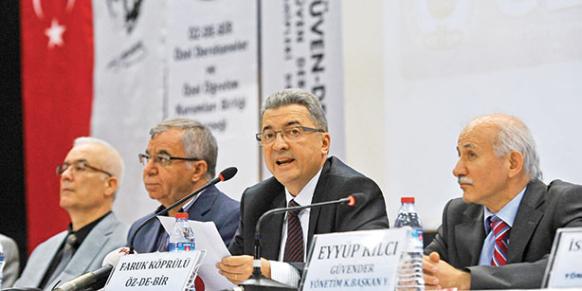 The Union of Private Preparatory Schools (ÖZDEBİR), the Güven Preparatory Schools Owners Association (GÜVENDER) and the All Private Education Institutions Association (TÖDER) have written to the Constitutional Court, asking the members to hear the testimony of industry professionals on the possible consequences of shutting down prep schools, Faruk Köprülü, the president of ÖZDEBİR, said on Monday at a press conference held in Ankara. Köprülü said the associations have also asked their member organizations to write to the high court.

The ruling Justice and Development Party (AK Party) decided last November to close down prep schools, stirring a massive debate. These schools, with their affordable fees, are regarded by mostly middle or low-income families as an equalizer of educational opportunities.

The AK Party’s bill was put to a vote and passed by Parliament on March 7 and signed into law by President Abdullah Gül on March 12. The law states that prep schools will be allowed to operate until Sept. 1, 2015, after which all preparatory courses will be shut down.

ÖZDEBİR and GÜVENDER held a joint press conference on Monday in which they shared their opinions on the law to shut down prep schools. They said the law will not solve the problems that are allegedly being caused by prep schools.

Köprülü said the representatives of prep schools were not against regulations, but noted that the government’s plans to convert prep schools into private schools will hurt the educational sector. He said although the law appeared to create incentives for prep schools to transform to private schools, it was in fact facilitating the transfer of student from private to public schools. Köprülü also said prep schools are the main means through which young people in the East and Southeast prepare for examinations, saying their absence might push young people into the hands of terrorist organizations.

He added the law will cause major financial losses to prep school entrepreneurs and cause many teachers and staff to become unemployed. He also noted that those who have the means to afford private tutoring will receive an unfair advantage over others who don’t.

Also on Monday the İzmir branch of the Turkish Education Personnel Union (Türk Eğitim-Sen) made a statement, saying it believed the law will be overturned by the Constitutional Court.

İzmir Branch No. 3 President Adnan Sarısayın said the attempt to shut down prep schools through an anti-democratic practice without doing away with the central examination system is a violation of educators’ rights. Sarısayın also noted that the changes also limited the terms of school administrators to four years, forcing those who have completed their fourth year to leave office.

He said his institution hopes the Constitutional Court, which is convening on June 12, will issue an injunction on the law. “If it rejects this freakish thing that cannot even be called a law and which destroys previously earned rights and upends democracy the high court will live up to its mission [of ensuring that all laws are in line with the Constitution].”

Independent Kütahya deputy İdris Bal also criticized the law on prep schools, saying it is a violation of Article 38 of the Constitution, which protects private entrepreneurship and free trade. He also said given the Constitutional Court’s past rulings the law is likely to be overturned.

Nationalist Movement Party (MHP) Ankara deputy Özcan Yeniçeri also made a statement on Monday, saying no constitutional law professional would possibly approve of the law. “The prep school law will be nullified. You don’t need to be very smart or even a jurist to know this. It will be overturned because it is against entrepreneurial freedoms.”

Constitutional law Professor Ergun Özbudun said the law seeking to shut down prep schools violates eight articles of the Constitution. Özbudun, who was a member of a team drafting a new constitution in 2007 for the AK Party, told the Bugün daily that the law violates Article 2 on the properties of the republic; Article 5 on the fundamental aims and duties of the state; Article 13 on the protection of fundamental rights and freedoms; Article 35 on private ownership; Article 36 on claiming rights; Article 42 on the right to education; Article 48 on employment and contracts; and Article 49 on the right to work.