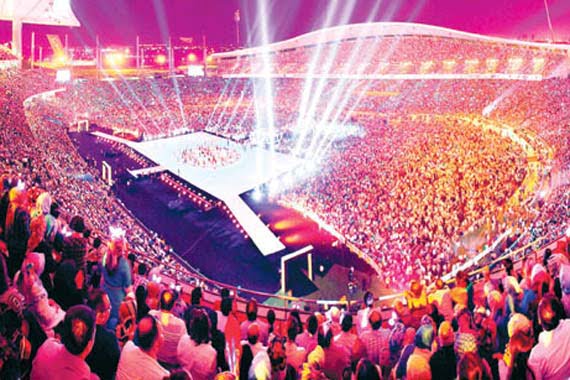 The 11th International Turkish Olympiad, a competition in which Turkish speakers from around the globe recite poetry, write essays and sing songs, wrapped up on Sunday with a ceremony at İstanbul’s Atatürk Olympic Stadium.

Students from 140 countries participated in this year’s 16-day Olympiad, fascinating local audiences with 99 stage shows in 55 cities across Turkey.

With the help of additional seating set up on the grounds of the 80,000-capacity stadium, 130,000 people packed in. Another 120,000 watched the ceremony on giant screens outside.

Laser light shows, music and fireworks greeted the mass of spectators, who burst into applause when the master of ceremonies invited a student from Kazakhstan to the stage to sing a song of separation and hope (“Hicran ve Umut”), composed by respected Turkish scholar Fethullah Gülen, who founded the Turkish Olympiads. Audience members chanted, “Turkey is proud of you.”

In a speech Erdoğan gave at the ceremony, thousands of spectators roared in approval as the prime minister slammed anti-government protesters who have been taking to the streets in several Turkish cities since May 27 over the proposed demolition of Gezi Park, a green space in İstanbul near Taksim Square. Erdoğan called crowds supporting him at the stadium the “real Turkey” and said they represented the majority of the nation, adding: “You [Turkish Olympiad students] showed us beauties amid so much ugliness during a two-week period. There have been two images that were completely opposed for three weeks in Turkey. There were Molotov cocktails and stones in one image while there were poems, songs and the Turkish language [in the other]. There were violence, rage and hatred in one image, while there were peace and brotherhood in the other. There were intolerance and ungratefulness in one image, while there was love in the other. Know this: The real image of Turkey is this [pointing to the spectators], this is the real picture of Turkey.”

Erdoğan then delivered a message of unity, saying that all people come from Adam and Eve. “Our language might be Turkish, Kurdish, Urdu, Bosnian, French, English or Spanish. But we can talk and interact in the language of hearts as the children of Adam and Eve. We all just want peace. We all pine for a peaceful world in which children are not killed and fathers do not die in clashes. … Struggling to build such a peaceful world is of course very difficult. This is a hard path to take. There may be some traps on this path. We should always be watchful for such traps.”

Erdoğan thanked the participating students, whom he called lovers of the Turkish language, and said goodbye to them. He also hailed the Hizmet movement – a faith-based social movement inspired by Fethullah Gülen, who focuses on education as well as intercultural and interfaith dialogue – for its contribution to world peace.

Customs and Trade Minister Hayati Yazıcı said that there is no other organization worldwide promoting intercultural interaction like the Turkish Olympiads, adding: “This organization has many unique features. You can learn a language, but making jokes, performing theater and reciting poems in this language are something else. It is very different. We are all very proud of seeing these students in various parts of the world.”

The Turkish Olympiad is a new inspiration that brings the voice of the Turkish people across the globe, Youth and Sports Minister Suat Kılıç told Today’s Zaman.

“Students from around the world make the Turkish language the language of love. They manage to spread the love, tolerance and respect of the Anatolian people to all continents and to all geographies. I heartily congratulate teachers [at Turkish schools around the world] who are working with self-sacrifice in countries very far away from their homelands.”

Egemen Bağış, state minister and Turkey’s minister of EU affairs, praised the performances during the closing ceremony, calling shows put on by students from many countries “perfect” and lauding the students’ coordination and harmony. The students looked like they’d been together their entire lives, he added.

“These students motivated us, and they made us stronger on days when we go through hard times. May God bless these all students and also Fethullah Gülen Hocaefendi, who is the great architect of the organization,” Bağış added.

İstanbul Mayor Kadir Topbaş said that if someone had told him years ago about the scope that the Turkish-language and culture organization would achieve, he wouldn’t have believed it. “I want to send my sincere respect and gratitude to [Gülen] Hocaefendi, as he was able to create a platform that brings together the world’s people through the beauty of our Turkish language,” Topbaş said.

President of the Turkish Confederation of Businessmen and Industrialists (TUSKON) Rızanur Meral said: “This organization enables us to look into the future with more hope. This organization makes us forget a little the unpleasant events that are prevalent these days in Turkey and fills us with more hope for a better future. I believe we will clearly see the positive impact of this organization in the coming years. The number of Turkey’s friends in the world is increasing swiftly.”

Zaman daily Assistant Editor-in-Chief Mehmet Kamış said he was pleased to see hundreds of thousands of people who want peace and brotherhood come together at the event, despite Turkey’s recent troubles.

Ağaoğlu Holding Chairman Ali Ağaoğlu told Today’s Zaman that students attending the Turkish Olympiads will be honorary ambassadors of Turkey in their home countries. “I want to express my gratitude to all the teachers for all their great efforts. I support any event that promotes Turkey. I take my hat off to this organization,” Ağaoğlu said.