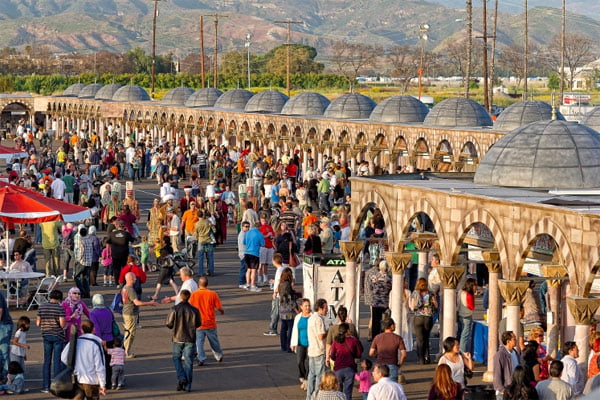 The four-day festival, which began on May 16, attracted a large number of people. More than 400 volunteers worked to organize the event, which took place on a 55-hectare fairground. Turkish, Kurdish, Bosnian, Kazakh, Armenian and even Mongolian volunteers helped make the organization a success.

The fourth edition of the Anatolian culture festival was a large affair, featuring exhibits, hundreds of food and craft stands and dozens of live performances by world-class musicians and dancers. Foods that visitors tried during the festival included a wide range, from tasty kebabs to freshly made baklava and flatbread (gözleme) to homemade dumplings (mantı) and vegetables cooked in olive oil. The popular sticky ice cream from Maraş and künefe (a made-to-order shredded pastry dessert) were also available. The guests this year also found a chance to taste the pistachios of Antep as well as that city’s baklava and layered kebabs. There were also workshops on local cuisine. Mersin’s famous meat dish tantuni was also introduced at the festival by Fevzi Öztürk, who has been a tantuni chef for over 30 years. Armenian, Greek, Syriac, Jewish, Turkish and Kurdish foods were available for visitors to try.

On Sunday, the last day of the festival, US Congressman Michael H. Honda from California’s 17th district performed the Şemame dance, unique to the southeastern and eastern Anatolian regions. He was at the stand representing Van province and watched the folk dancers dance the Şemame for a while and later joined in together with Justice and Development Party (AK Party) Van deputy Gülşen Orhan.

The Van Governor’s Office also had a breakfast event on Sunday. Van, which is famous for its special breakfasts, hosted about 1,000 people at its Los Angeles breakfast. The guests had a chance to taste otlu peynir (cheese with herbs), karakovan honey, a special flour made from chickpeas, Van butter, pastries from the region and Van’s very special bread. There were long lines in front of the breakfast buffet, and more tables had to be set up when the existing tables weren’t enough for all the visitors. Republican People’s Party (CHP) Deputy Chairman Sezgin Tanrıkulu, Peace and Democracy Party (BDP) Diyarbakır deputy Altan Tan and a large number of press members, editors and celebrities from Turkey attended the breakfast.

About 60,000 visitors came to the festival, including locals, historians, researchers and members of Anatolian peoples who reside in the area. The cost of an entrance ticket was $12 per day.

Access to the festival grounds was available through 14 gates, representing the 14 most important civilizations in Anatolia: Hittite, Commagene, Lydian, Urartu, Phrygian, Sumerian, Byzantine, Roman, Seljuk and Ottoman, and lastly the gate symbolizing the Republic of Turkey. Individuals wearing costumes representing the civilization of the gate they passed through greeted the visitors.

Some of the visitors from Turkey, such as actors Nadir Sarıbacak and Asil Büyüközçelik, who star in the “Şubat” (February) television series, said they felt like they were in Turkey. Büyüközçelik evaluated the festival: “The décor and the costumes are spectacular. Awesome, entertaining and just spectacular.”

Sahak Maşalyan from the Armenian Patriarchate said: “Many people come to the festival and get to know the rich culture of Anatolia. This of course makes us proud as people from Turkey.”

The world’s tallest man — Sultan Kösen of Mardin — posed for pictures with visitors, impressing festivalgoers with his positive spirit and cheerful attitude. The traditional mehter band also drew attention as well as the whirling dervishes.

The festival presented a wide variety of Anatolian music, with a mix of folk, pop, traditional and religious performed live by dozens of musicians traveling from Turkey including Serkan Çağrı, Turkish clarinet master and his ensemble; the Whirling Dervishes, Sufi performers from the City of Konya; Ömer Faruk Tekbilek, Turkish virtuoso and his ensemble; Yaşar, a popular Turkish pop singer; the award-winning Yenimahalle TUBIL Folk Dance Group; the Van Folk Dance Group from eastern Turkey; Udi Yervant, an Armenian singer and musician; Ferhat, a Turkish pop singer; the Ottoman Marching Band, one of the world’s oldest military bands; the Reyhani Folk Music and Dance Group from the city of Mardin; and the Keravnos and Kymata St. Sophia Church Greek Dance Group.

For days prior to the event 400 volunteers worked hard on the festival grounds. The volunteers, coming from all walks of life, included doctors, academics and even Microsoft engineers. İlker Yıldız, the Los Angeles regional director of the Pacifica Institute, the festival organizers, said: “They have made great sacrifices. We had volunteers who took time off from work and spent some of their annual vacation time working here. Some who weren’t able to take time off work came to the grounds after work and worked until late at night.” Yıldız said every volunteer is assigned the most needed task at the time, regardless of his or her profession or standing in society.

Yıldız also said that the volunteers don’t only work prior to the festival, but also after, removing and uninstalling stands, which usually takes about a week.

Not all volunteers are full-time employees. Hatice Muslu, from Kütahya’s Tavşanlı district, came to Los Angeles to look after her granddaughter who was born in the US. When she heard there was going to be an Anatolian festival in Los Angeles, she became a gözleme-making volunteer. “I wanted to contribute as much as I could,” she says. Although the days of her youth are behind her, she doesn’t complain, kneading dough at the gözleme stand. “It is not difficult at all, one just doesn’t get tired when one volunteers for a good cause.”

Yasemin Ayaz, who worked in Kazakhstan for 15 years, and her husband moved to Las Vegas. She also is a gözleme volunteer. Her husband, Erdal Bey, is also volunteering on the grounds. She said: “I had heard a lot about the festival, but I didn’t know it was this great. My husband and I decided to volunteer this year, and the first two days were very crowded.” Ayaz said there are five job descriptions for volunteers at the gözleme stand: “Preparing the dough, kneading, placing the stuffing inside the prepared dough, cooking and finally selling.”

Tosca Admir from Sarajevo is one of the volunteers in the festival. “I see Turks as brothers, and I wanted to come help with Bosnian food when I heard about the festival.” Admir says: “This is my second time at the festival. I hear thousands of Americans admiring Turkey and saying it is much different than they thought.”

Anu Batsengel graduated from a Turkish high school in Mongolia in 2009. Batstengel moved to the US to study after studying in Malaysia for two years. The Mongolian volunteer, who speaks five languages, is fluent in Turkish. She said: “I came to Los Angeles from Seattle just to volunteer at the festival. I am constantly communicating with people, I never get tired, I am really happy to be working here.”

The festival was organized with a budget of $2.5 million, and it is mostly possible thanks to volunteer contributions, although of course professional workers are also employed on the grounds. The sponsors are governors’ offices of participating provinces from Turkey and participating private companies, according to Medialog Platform Secretary General Tercan Ali Baştürk. However, the largest amount is usually donated by new generation US immigrants from Turkey. There are 32 associations along the West Coast of the US founded by individuals close to the Fethullah Gülen religious movement. They all contribute financially.